An Interpretation of the Lenten Prayer of Saint Ephraim the Syrian: Conclusion (10) 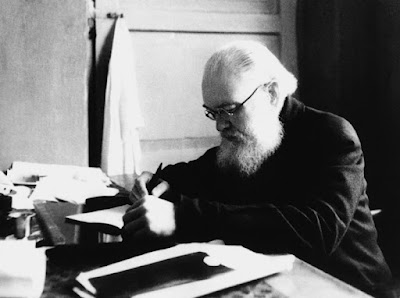 By St. Luke, Archbishop of Simferopol and All Crimea
The great prayer of Ephraim the Syrian ends with an extremely important petition:

"Yes, Lord King, grant me to see my own offenses, and not to condemn my brethren, for You are blessed unto the ages of ages. Amen."

No one has such a custom: from the beginning of the day until the very night, we think about everything, do everything, but we don’t do the important thing - considering our own heart. No one does this, except for a very small number of people who have dedicated themselves to God, they have this most important, primary occupation: they look for the impurities of sin in their own hearts. When they find it, they easily and quickly get rid of it, because when they find any impurity in their hearts, they become disgusted and try their best to get rid of it. When they see sins, they will repent and be cleansed of them.

Remember the words of the Apostle Paul to us: “But why do you judge your brother? Or why do you show contempt for your brother? For we shall all stand before the judgment seat of Christ” (Rom. 14:10). When we condemn others, we do not remember, we do not notice that we ourselves are guilty of the same. And we know that there is a judgment of God not only for the sins we have committed, for which we in turn condemn our neighbors, but also for the condemnation itself: “Do you really think, man, that you will escape the judgment of God by condemning those who do such things and doing the same yourself?” (Rom. 2:3) The Lord leads you to repentance, and not to condemnation of others. Don't worry about others.

Remember how they brought to the Lord a woman taken in adultery and asked: “Teacher, Moses ordered such sinners to be stoned. What do you think?" The Lord Jesus Christ did not immediately answer. He sat in the courtyard of the temple and wrote something with his finger in the sand. And only when they asked Him a second time, He gave the most amazing answer that He could give: “He who is without sin among you, cast the first stone.” With great shame, bowing their heads, the scribes and Pharisees, who considered themselves righteous, began to disperse one after another. And Jesus wrote in the sand, and finally raised His head and asked her: “Where are your accusers? Nobody has condemned you. And I do not condemn you. Go and sin no more” (John 8:4-11).

What an amazing prohibition of condemnation, how clearly the Lord said that one should think first of all and most of all about one's own sins. He who is without sin, let him cast the first stone. We are not without sin, which means that we do not dare to throw a stone of condemnation at others, yet we throw stones constantly, every day and every night we throw stones of condemnation: “Who are you to judge another’s servant? To his own master he stands or falls. Indeed, he will be made to stand, for God is able to make him stand.... For we shall all stand before the judgment seat of Christ” (Rom. 14:4, 10). We need to think about this judgment on us, about ourselves, and not be concerned with other people's sins. See how holy and important this law is.

What should we do if we see a person who obviously sins and deserves condemnation? Even then one should not condemn, one should rather put the barrier door on one’s lips, not condemn the sinner, but pity him, remember that his answer is heavy before God, and silently offer up a short prayer: Lord, forgive him. And then the demon of condemnation will flee immediately, for demons flee from prayer. If we condemn, the demon will remain, and another time we will condemn, and we will condemn without end.

Where does the spirit of condemnation come from? From pride, from the fact that many consider themselves superior and better than others. Often there is condemnation from envy: we envy those who have received spiritual gifts, sometimes even just pious people, and envy leads to condemnation. They condemn from malice, from hatred. And there is very little love, but there is a lot of anger and hatred in our hearts. This malice, this hatred prompts us to condemn our neighbors, closes our eyes to our own sins and shortcomings.

We condemn a person very often and without any envy. It often depends on an ingrained habit of judgment. Judgment, like everything else, becomes our habit if we constantly condemn.

Anything that is often done becomes our skill. If someone has envy, if hatred owns the heart, the habit of condemning will take root, it will always, incessantly, tirelessly condemn.

This habit must be eradicated, not allowing it to grow in us. You must catch yourself in every condemnation, condemn yourself for every condemnation. Having condemned ourselves once or twice, we will learn to refrain and stop judging others, and focus our spiritual gaze on our own heart.

Therefore, let us fulfill what we ask in the prayer of Ephraim the Syrian: Yes, Lord King, grant me to see my own offenses, and not to condemn my brethren, for You are blessed unto the ages of ages. Amen.