A Lesson for the Soul on Holy Saturday: Be Courageous (Archimandrite Athanasios Mitilinaios) 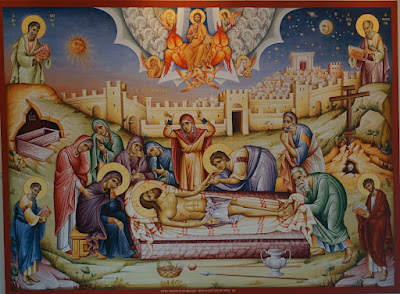 Be Courageous
On Holy Saturday
we commemorate
the Entombment of the Divine Body and
Descent Into Hades of our
Lord and God and Savior Jesus Christ.

By Archimandrite Athanasios Mitilinaios
The Great Teacher was dead.

The fear of the Jews could be found sealed in a tomb. However, the consciences were so shaken by their quagmire with the words of the One, who even dead they still feared. His name causes loathing and hatred. The atmosphere is so electrifying that no one can talk about Him in public without risk.

There are two categories of those who stood as admirers of Jesus. Those who openly followed Him, and those who, for fear of the Jews, remained His hidden Disciples.

No one can boast of being courageous. If you vow that you love Jesus and are ready to die for Him, the Apostle Peter and the other Ten Disciples will expose your falsehood.

If again, you do not feel certainties of faith and love inside you, there come times when you stand above things. And this is what Nikodemos, Joseph and the Myrrhbearing Women show.

Approaching God with the mind and heart requires courage. The mind has its hesitations, the heart its reasons.

Courage is a divine gift given to the humble.

"Not that we are sufficient of ourselves to think any thing as of ourselves; but our sufficiency is of God" (2 Cor. 3:5). The preaching of Christ requires courage. Even experiencing Christianity requires courage. The world is not ready and willing to accept the gospel, so it opposes it. The natural condition of the Christian is danger. But it should never be taken into account. He has three dangers to face: People, life and opposing spiritual powers. The courage that Christ gives him will give him the most glorious victory.

Apolytikion. Tone 2.
The noble Joseph, when he had taken down
Your most pure body from the Tree,
wrapped it in fine linen and
anointed it with spices, and placed it in a new tomb.
John at 2:40:00 PM
Share
‹
›
Home
View web version