Saint Matrona of Chios is not only highly venerated on the island of Chios, but she is very popular in many Aegean islands and their inhabitants have a special reverence for her.

Thus, in Samos and Ikaria, the wonderworking Saint is especially honored and praised, since both Aegean islands neighbor Chios and are adorned with a total of ten sacred churches in her honor. The honor and veneration of Saint Matrona of Chios in Samos and Ikaria has a special interest and important historical extensions. After the fall of Constantinople in 1453, the people of Samos, following the Genoese, who had occupied the island, were forced to flee to Chios due to pirate raids. Thus in 1475 Samos submitted to the Turks and was abandoned for about a hundred years. The re-colonization of Samos took place in 1572 after the privileges granted to the island by Sultan Suleiman, and only a Christian population settled there. At this time the so-called Chiosamians, ie the people who had their origins in Samos but were living in Chios, returned to Samos and brought with them icons of Saint Matrona. In this way, her veneration and honor was established on the island and sacred churches were erected in her name in Ano Vathi, where an old miraculous icon of the Saint is kept, in Neo Karlovasi, where the churches was erected in 1845 and is decorated with a magnificent wooden iconostasis, in Mytilenious, where the reverence of the inhabitants towards the Saint is memorable, in Palaiochori Kampos Vourlioton, where the church is mentioned in a sigil of Patriarch Cyril from the year 1745 and is decorated with remarkable frescoes in folk style, and in Koumeika. Saint Matrona is also honored in Samos with an aisle named after her in the holy churches of Prophet Elias in Marathokampos, Saint Demetrios in Ydrousas and Saint Anna in Chora, while in several churches of the island there are portable icons of her (Saint Nicholas of Ormou Karlovakou, Saint Spyridon in Vatheos, Dormition of the Theotokos in Chora, Dormition of the Theotokos in Mytilenious, Transfiguration of Savior in Pythagoras). But also in Ikaria after the fall of Constantinople in 1453, the Giustiniani of Genoa and more specifically the family of the Aragians maintained the sovereignty of the island until 1481, paying the Turks a tribute. However, seeing the power of the Turks increasing threateningly, they left Ikaria and took with them the inhabitants of the island, taking refuge in Chios. Returning later to their island, the Ikarians established the veneration of Saint Matrona and built churches in her name in the villages of Perdiki (1887), Oxe, Maratho, Dafni and Vrakades.

Saint Matrona enjoys a special honor in Andros, where to the inhabitants of the island she is better known by the nickname "Agia Tsoura", which is a corruption from "Agia Kyra or Kioura". In this beautiful Cycladic island, eight sacred chapels bear her name and are located in the villages of Batsi, Mesathouri, Katakilo, Stenies, Apoikia (near the Monastery of Saint Irene), Episkopio, Aipatia and Sasha. Saint Matrona is also solemnly honored in the historic Church of the Panagia Palatiani in the town of Andros, known as "Agia Tsoura", in which an old portable icon of the Saint is kept.

Also churches dedicated to Saint Matrona of Chios exist in Chora of Patmos, in Partheni of Leros, in the village of Finikia of Santorini, where the church was built in 1859 and on October 20 is held one of the most beautiful festivals of the island, in the villages of Falatados and Marlas in Tinos, in Chora of Kimolos, in Aegina in the area of the village Agioi Asomatoi, while in Hydra there was founded in 1865 by the monk Chrysanthos Karantzas the Monastery of Saint Matrona of Chios in which is kept a beautiful portable icon of Saint. 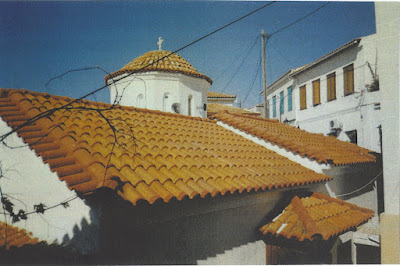