By Archimandrite Demetrios Kavvadias
The Victorious Martyr of Christ Nestor is known to us from the life of Saint Demetrios. Thessaloniki is the place of origin of Saint Nestor.

The age at which he appears is young, in fact according to Saint Nikodemos the Hagiorite it was "when the hairs of the beard begin to grow", while Saint Damaskinos the Studite mentions he was "around twenty years old". Dionysios from Fourna says he was "young and without a beard" and Photis Kontoglou says he was "young without a mustache and just beginning to grow a beard". The teacher of the Gospel, Michael Galanos, identifies his form as beautiful: "He therefore bent his blonde and beautiful head and gave his last breathe with the striking of the sword, in order that he may ascend even more beautiful, to be with the ruler of life, the source of immortal beauty." Scholars of his life therefore determine his age and form as directly related to his story, since the hagiography and the iconography around his person coincide.

For his status it is stated that he was "from among the commoners", ie a citizen. Theodoros Metochites points out that he was an "excellent hoplite of Christ" and the Archbishop of Thessaloniki Plotinos preserves the testimony that Saint Nestor is characterized as "an invincible soldier of Christ".

From his childhood he embraced Christianity and his training in the faith and the spiritual life he owed entirely to Saint Demetrios. 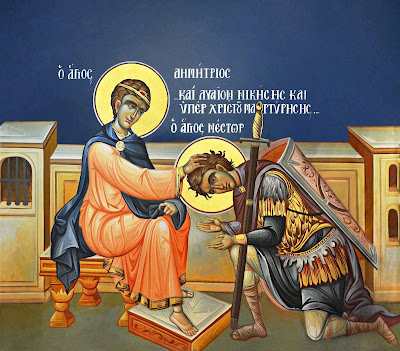 At the beginning of the fourth century the emperor of Rome was Galerius Maximian, son-in-law of Diocletian. He was also the main instigator of the persecution against Christians and the Church that broke out in 303 AD. In the Balkans, soldiers carried out atrocities against the Christian population on imperial orders. At that time, Saint Demetrios was also arrested on the accusation that he actively participated in the Christian gatherings in Thessaloniki.

Saint Demetrios was the offspring of a noble family of the historic city. He enlisted early in the Roman army and emerged as a brave and honest official of the emperor and over time received the title of Grand Duke. He was a Christian with a fiery faith and zealous missionary, exerting great influence on the Christians and especially on the young people of the city, whom he catechized, baptized, preached to and cultivated spiritually. The public confession of his faith brought him to prison. 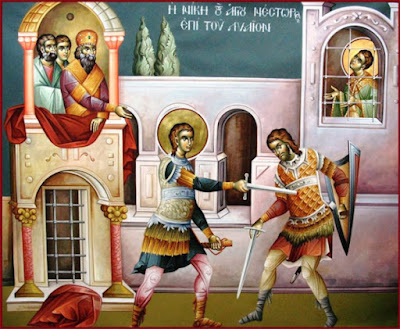 When Maximian visited the city, he provocatively presented the terrible gladiator Lyaios in a ceremony after the horse race at the stadium of Thessaloniki. With more courage and boldness, young Nestor came "to the stadium near the balanion (bath) where Saint Demetrios was being held" and asked for his blessing and encouragement.

Saint Demetrius blessed him and assured him that "you will both be victorious over Lyaios and be martyred for Christ". Armored with the blessing of his spiritual guide, he hurried happily to the stadium in Thessaloniki. And after he made the sign of the Holy Cross and invoked the power from on high with the prayers of his spiritual anointer, saying "God of Demetrios help me", he overcame and killed with his small sword the giant pagan Lyaios. And as the various hagiographic texts typically say, the sword "penetrated" the heart of Maximian after this victory of the young Nestor humiliating the emperor before the persecuted Christians. Enraged, Maximian attributed Nestor's act to magical power and called him to defend himself to prove his satanic art or to point out his accomplices. 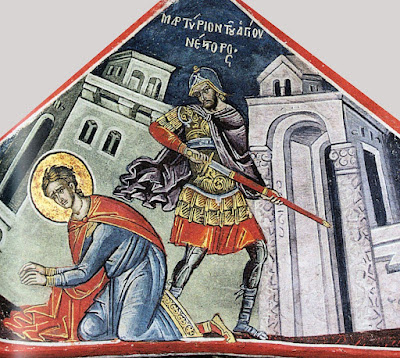 Nestor with undiminished courage claimed that "the God of Demetrios, the God of the Christians, He sent His angel, to decapitate with my hands the wretched and proud one". Thus the humiliated emperor ordered the execution of the two Saints for the practice of worship not tolerated by the legal order and the accusation "that you are Christians". Without a second thought, "Saint Demetrios was pierced, while Saint Nestor was beheaded." Saint Demetrios had been imprisoned "near the stadium at the public cast-iron balanion around the furnaces guarding the arch". A group of soldiers entered the damp prison and killed him with spears. When the Saint saw the soldiers, he bravely raised his right hand pointing to his right side, saying: "On the right side, where Christ my Savior was pierced."

Happily, the bloodthirsty emperor ordered "Nestor as a Christian to be decapitated in the western part of the city, at the so-called golden gate". His abominable order was carried out "by his own sword" with which Lyaios was killed. The executioner was the prefector Minoukianos.

The funeral of the two Saints was undertaken by the young Loupos, a child and also the spiritual son of Saint Demetrios who, with the blood-stained cloak and the ring of Saint Demetrios, made the sign of the cross over the Christians and healed them. A little later, however, he, with a martyr's death, followed them to the Kingdom of Heaven. The memory of Saint Demetrios is celebrated on October 26, Saint Nestor on October 27 and Saint Loupos on August 23. 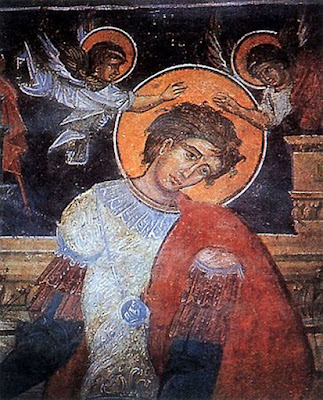 In honor of Saint Nestor, a Holy Temple was erected south of the Basilica of Saint Demetrios, between Agios Dimitrios and Olympus streets, where the Fethiye Cami was erected after the occupation of the city by the Turks.

The oldest known canon to Saint Nestor was composed by the stylus pen of Joseph the Hymnographer and bears the acrostic: "Τιμώ σε πιστώς μάρτυς ηγλαϊσμένε, Ιωσήφ" ("I honor you faithful glorious martyr, Joseph"). A complete service can be found in the Library of the Kyriakon of the Skete of the Holy Trinity of Kavsokalyva (Codex 159). In recent years, a Service, Supplicatory Canon, etc. were composed by the Elder Gerasimos Mikragiannanitis, Eldress Isidora Agierotheitissa and various hymns by Archimandrite Nikodemos Aerakis and Nun Synkletike Chrysokastritissa.

Churches and chapels of Saint Nestor are located near the Kaftanzoglio Stadium at 159 Agiou Dimitriou Street in Thessaloniki, on the second floor of the Christian Refuge of Thessaloniki, in the village of Schinias, Veria, in Kokkinochori, Eleftheroupolis, in Melissi, Corinth, in the Monastery of Saint Prokopios in Pyli of Trikala.

His holy figure is depicted in many old Churches and Monasteries, both in Mount Athos and outside. Also frescoes of the post-Byzantine period are found in historic monasteries of Romania where he is presented in a prominent position next to Saint Demetrios standing in military garb.

Finally, in the  Metropolis of Ierapetra and Siteia as well as Didymoteicho, Orestiada and Soufli, "Nestoria" is held every year, with events in honor of Saint Nestor as the patron saint of youth and sports.

Apolytikion to Saint Nestor
Composed by Nun Isidora Agierotheitissa
Tone 1. Citizen of the desert.
Encouraged by the words of Demetrios glorious Nestor, you put to shame the boldness of Lyaios, in the stadium invincible one, and you received the crown from the hands of Christ, the Lifegiving Athlete, wherefore we are forever amazed at all of your struggles, crying out: rejoice steadfast Martyr of Christ, rejoice you who are worthy of wonder, rejoice guardian of Thessaloniki, the support of all the faithful.