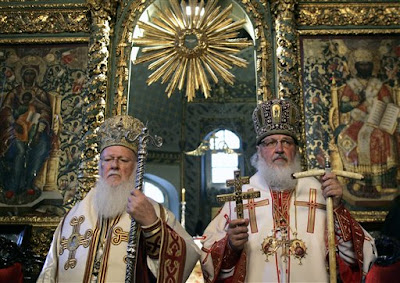 [Examples of Some Newer Errors]

* In the vast Russian Federation, in Ukraine, in Moldova, in Belarus, in the Russian parishes of the Diaspora, in every place where an "altar of Russian worship" to God (sic!) is erected, it is mandatory for the name of the Russian Patriarch to be commemorated first and then the local Hierarch! We thus have a demise of Eucharistic theology, of Orthodox liturgical theology, of the unity of the ecclesiological and the Synodical-Hierarchical sacredness of the Church. Even in the mystery of the eucharist of God, the Patriarch of Moscow is projected as a national and world ruler, something like an absolute Pope. With such practices, which are recorded in a customary way in their subconscious, how can our diplomatic friends not be taken by Russian ecclesiology?

* Russian citizens have been appearing on Russian channels and on the internet (Facebook) lately, invoking the great numerical power of their country's national population. And in fact, they question every invocation from the sacred canons. You will hear, for example, posted on the internet by Russians: “What are these canons? We are all about the present day! There is no Constantinople. She is Turkish. We have the authority and the power. When they had the authority, they had Ecumenical Synods and canons. Now we have the power."

Do you understand what all this means? Do you understand what kind of religious logic has passed into the common sense of these people? It is the fruit of the historical alteration due to the Great Russian Idea in a religious overcoat. When the Russian clerics publicly talk about Constantinople alone, when simply talking about a (certain) Patriarchate of Constantinople, when simply talking about a (certain) Bartholomew, or even about Patriarch Bartholomew, they are doing it with the same logic of Russian expansionism, Russian megalomania. They stand "warlike" against the Ecumenical Patriarchate of the Queen City, and so many Ecumenical Synods that were gathered either in the City or in its Archdioceses and Dioceses, however within the canonical territory of the Ecumenical Patriarchal throne.