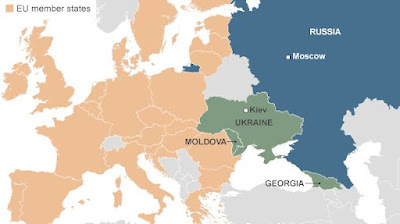 Within the Russian hegemony (politically justified, but ecclesiastically problematic and theologically ill) stands the ecclesiastical question of Ukraine. The Ukrainian issue has many roots, but it is treated by Russia as their own field of action.

The Russians, who have caused so many autocephalies, have for many decades refused to take such a step in Ukraine (albeit anti-canonically). This is because they want besides vast Ukraine also neighboring Moldova and beyond this Abkhazia and Ossetia as an ecclesiastical space of power, because they ultimately serve political plans, the Russian policy of expansion, the Great Russian Idea.

For 300 years, daughter Russia has struggled with great arrogance to seize, to seize everything and to constantly seize the motherhood from the spiritual ecclesiastical Motherhood of the Ecumenical Patriarchate, with actions of occupation, with actions of abduction. Not to serve some justice on behalf of their sister Church (Ukraine), but to be proclaimed even higher than their common spiritual Mother, the Ecumenical Patriarchate.

In fact, it is not enough to seize only its sister Ukrainian Church, but also to change its sisterly equality with Ukraine into a "forced submissive relationship". This serves Russian policy, which has already occupied three eastern provinces of Ukraine (Crimea and two others).

Russian hegemony with a religious overcoat is projected everywhere. It is an incredible novelty and superficiality of religious faith, such that, if the liturgical writers among the Holy Fathers and the Holy Apostles before them were alive today, they would have rebuked it in the most severe way of the writings of Saint Paul.