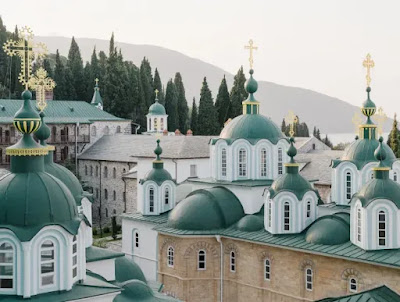 In the second half of the 19th century we have a gigantic growth of Pan-Slavism, in the Balkans and in Eastern Europe, which is gradually spreading to the West (as official organizations and formal consular tools throughout the West). Pan-Slavism was and is a "tool" of Russian expansionism, a tool of foreign policy.

The small Permanent Russian Synod (and from 1941/42 the new Moscow Patriarchate together with the Small Synod) was inoculated with Pan-Slavism. What the ecclesiastical Kremlin diplomats are now trying to attribute to the suffering Ecumenical Patriarchate of All Orthodoxy with a thousand and two methods is, in essence, their expansive Russian selves, it is a "self-confession".

* This has a long history with very tragic consequences. Romiosini (the spiritual godfather of the Russian Church and the other modern Churches) and the Ecumenical Patriarchate (the Mother Church) are overlooked, becoming targets for the practice of Russian expansionism. What the Russians and the incited Slavs are trying to do for the Ukrainian issue today, they had dared to do with more ferocity in the past!

* At the instigation of the Russians began the atrocities of the Bulgarian Exarchate in Greek Macedonia, the criminal extortion of countless among the population to be integrated into the Bulgarian Exarchate and Bulgarian Komitat (i.e. we had a common attack along political and religious lines with Bulgarianism, which was being pushed from behind by the Russians). It is a very great and devastating tragedy in the bowels of Orthodoxy. The Greek Government was silent. Only the Ecumenical Patriarchate rushed to save its children of Romiosini intact, and to correct its other children (the fanatical Bulgarians with their innumerable monstrous crimes). So, behind the proclamation of Bulgarian Autocephaly are hidden the political unholy pressures of Bulgarianism, in the depths of Pan-Slavism (... which Orthodox people rushed to respect the Ecumenical Patriarch? to respect the truth? to respect the mystery of the Church of Christ?).

* The Russian plans from a century ago spread also to Mount Athos and destroyed the Monastery of Saint Panteleimon with masses of monks. This caused a lot of tension. The monks who were of Greek origin had to remove themselves. The Secretary of the Monastery, Elder Daniel of Smyrna, was forced to leave and go to Little Saint Anna, then establish the brotherhood of the Danielites (he was the very wise friend of Saint Nektarios [and recently canonized by the Ecumenical Patriarchate]). The Russians with their money bought Cells, set up Sketes. And if the Russian monks had not encountered the heresy of the Name-Worshipers, who knows what other expansions we would have. If Communism had not mediated, who knows how many other expansive Monasteries would have been created, like the Skete of Saint Andrew.

In the revisionist debates of 1946-49 on the Constitution and in the editorial debates of committees and plenary sessions of the Parliament of 1975, one can observe information regarding many elements of the Russian political acquisition of moorings on Mount Athos, with access to the Monasteries (see Ἀναστασίου Β. Νικόπουλου, Τό εἰδικό καθεστώς τοῦ Ἁγίου Ὄρους καί ἡ ἔννοια τῶν “Ἁγιορειτικῶν καθεστώτων” [Συμβολή στήν Ἑρμηνεία τοῦ ἄρθρου 105 Συντ], Νομοκανονική Βιβλιοθήκη 35, Κατερίνη 2017, σσ. 195ἑξ. καί σσ. 207ἑξ.). We therefore understand the manifold (religious and political) tone of the recent instructions of the Russian Patriarchate to their clergy and laity, "to visit only their own monastery" (sic!), in which, after all, is commemorated first and anti-canonically Patriarch Kirill of Russia. I emphasize again: the Ukrainian issue is an occasion/opportunity for the implementation of the permanent expansion of the Great Russian Idea, with a religious investment, something that is set in stone. This is an insult to the mystery of salvation. It is a direct insult to the biblical and liturgical divinely inspired words (cf. "shed on our behalf and for all"), and they refer to it with hypocritical moralism, even though they renounce and negate it.

By the way, after 1920-22, in times of Greek weakness, our "allies" the Serbs claimed rights to the port of Thessaloniki and free land access. Venizelos, in 1928, with a political friendship movement with Italy, overthrew the pressures of our Serbian friends (they all have their meaning and significance).

* The Russian plans spread to Antioch (with the Russian fleet on the coasts of present-day Syria-Turkey and with the direct support of the Arab-speaking exclusivity, the last Greek Patriarch was forced to leave for the Holy Land, the late Spyridon). How can our Russian brothers not be supported today by our brothers from Antioch? The Antiochians give priority to the Arabic-language expression of our faith, and the Russians continue to expand into a diplomatic expansion of roles.

* Russia as a motive for religious diplomacy stops in Iran until World War II, but returns sharper with the change of Stalin's religious policy, after World War II, and the valuable motherly contribution of the Russian Church to the painful sufferings of the people.

In the 1950s, Stalinism and the KGB adopted Russian expansionism through the Church. However, the Stalinist state's liaison with the Russian Patriarchate is the KGB chief, the political leader responsible for countless murders ... I won't expand on this (this has all been written by the Metropolitan of Nafpaktos).