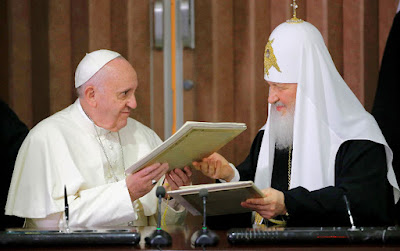 This is somehow aimed at the ecclesiastical fullness of 15,000,000 people who followed Filaret - bishops, clergy, monks and laity. It was done in order to force either him or his ecclesiastical faction to bow their necks, for reasons of pastorally fencing off the rest of the people of Ukraine, and for the exaltation of the splendor of Moscow. We have everywhere an authoritative rationale and practice, as I emphasize again and again. A rationale and practice of new Regulations in the ecclesiastical space, outside and above the Holy Synods of Orthodoxy. And they rest on the compulsorily granted autocephaly and patriarchal value of the 16th century, which they expand at their pleasure in extent and depth. We have something like a new Orthodoxy, as if the inter-patriarchal ancient Apostolic Orthodoxy had disappeared, and they are rebuilding a new structure and rational Orthodoxy. It is similar to a secular political change.

* As an example of this Super-Orthodoxy, in February 2016 the Patriarch of Moscow held an exclusive dialogue in Havana and signed a joint statement with the Pope as if he was the First of the East. This took place even though it was commonly decided for the Holy and Great Synod of Kolimvari to take place. This move by Moscow was not considered unique. A month earlier, the Russians had a formal theological dialogue with the Syro-Jacobites. They set aside all notions of decency and ethics, since (at the very least) it should be understood that such a direct dialogue would be carried out by the Patriarchate of Antioch in their common and familiar political territory (that is, Orthodoxy in Syria). Who does the Russian Church represent? With such moves, the Patriarchate of Moscow is showing unbridled hegemony.

And all this explains the rationale of political authoritarianism and hegemony that runs through Russia. All this explains the absurdity of the "cutting off from communion", which is something like a "punishment of non-communion" imposed by the daughter Church of the 10th and 16th century to our Mother Church of the Ecumenical Synods! It was not the Canons (let them call upon them after a feast), but the clear Russian hegemony and its tactics of imposing them, which is the cause of this interruption of communion. In a way we have an unbridled arrogance and a direct insult not just to some Canons (as the Ecumenical Patriarchate dictates), but to the whole system of Canons and to the whole system of the Holy Ecumenical and Local Synods which convey and affirm in their Acts the Patriarchal value of the Ecumenical and other ancient Patriarchates.