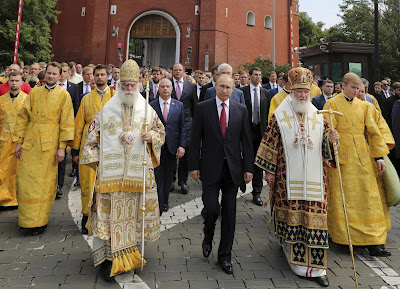 * As is confessed by the Bishops of the Patriarchate of Alexandria (Nikephoros of Kinshasa), the Russians in various African countries are seeking the right of Russian priests to liturgize in the Russian Embassies of Africa. This is a stark demonstration of unbridled hegemonism and expansionism. They achieved the authorization of the Patriarch of Alexandria for a few countries of Africa, something like exarchies, and now they want to expand more, something like a Super-Patriarchate!

It seems that they succeeded in Cyprus, with the authorization of the Church of Cyprus, they spread even into occupied Cyprus, even though they solemnly lie and deny any connection with some Russian missions of clergy to the land of occupied Cyprus. However, they also have a relationship and they promote the action of such groups on Cypriot soil.

* The Russian priests around the world necessarily commemorate first the Patriarch of Moscow, then the local Metropolitan and any local Bishop (if there is one). Now we have an unprecedented practice that gives birth to and nourishes in both (in the Patriarch of Moscow on the one hand, and in the groupings of bishops and clergy on the other) an authoritarian and ownershipal sense of the gift of the Priesthood of Christ and the operation of this gift in the Church.

They also observe the following papal rule. During his visits, the Patriarch of Moscow may ordain a Bishop without a previous Synodal election, which he receives retroactively. He is an authorized Superbishop! Something like the Pope of the East. And it is indicative of the authoritarian sense and management of the Priesthood, that in its title the Patriarch of Moscow also bears the term "Archimandrite of the Stavropegial Monasteries". This is against the High Priesthood and lessens it, but it causes a sense of superiority in oneself and in the hearers and in the monasteries throughout the Russian territory.

In the case of Ukraine, although they publicly criticize the Ecumenical Patriarchate of the recognition of deposed Bishops, the Russian Church itself receives deposed clergymen from other ecclesiastical jurisdictions and elevates them. In other words, the Russian Church anxiously controls expansion in every way and by every means. This is its only ecclesiological measure: there are rules for others but no rules for them. If something is Russian, it automatically becomes correct. If something is not Russian, it is automatically seen as dangerous for their established ecclesiastical policy.