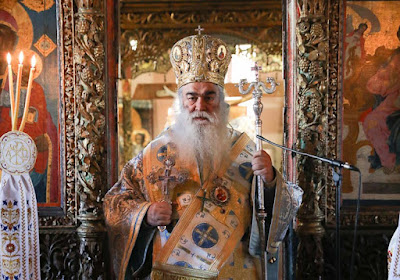 By Metropolitan Demetrios of Goumenissa, Axioupolis, and Polykastron
An artificially-made great tension has been incited in regards to Ukraine. Ukraine, however, within Inter-Orthodoxy is something like a smokescreen. In our humble opinion, as a Body of Hierarchs in the Holy Spirit, we must definitely clarify in our consciences two things: behind the Ukrainian issue there is hidden (1st) the hegemony of the Russian Church, and (2nd) its steadily expansive actions (the "Great Idea" of the Russians and its applications in the depths of time). And, instead of our Russian brothers apologizing for these two, they are turning towards regional issues (where the responsibility lies primarily with themselves).

Even the lists of grave sins in public posts and the information about the dubious origin of Ukrainian bishops are a method of disorientation from the problem. It is the art of polemics. This technique goes against the sanctity and identity of the Church. It characterizes only the secularized conception of the Church which deprives it of its God-established revelatory dimension and confines it to the narrow and depressing boundaries of space-time or the technique of propaganda. An undiagnosed propaganda technique can be temporarily persuasive. But in the long run it will prove to be condemned, it will cause a lot of disgust for its method, there will be many tears and great pity for the daring ones!

We need to understand this. The Russians have been trapped and are showing us their problem: they are unjustly hostile to our common Ecclesiastical Forefather (the Ecumenical Patriarchate), and they are shamefully trapping the Pan-Orthodox Decree. They do not say everything. They say the peripherals only, to cause impressions and noise. They divert attention from the main problem.

For three centuries we have in Orthodoxy declared an undeclared war: the war of the abduction of ecclesiastical territories and ecclesiastical jurisdictions and the war of the abduction of leadership, like a "hybrid" Church. It was a trench war, now it has become a very aggressive war! And such a war (if we think about it with common sense) is not waged by anyone who has lawfulness, but by someone who wants to illegally seize jurisdictions and rights that do not belong to him. That is why he is "pre-formed" and "post-formed" into a wounded warrior of God's rights! If possible!

What do I want to say? First of all, let me clarify that we are referring to the administrators of religious power and political power (while we respectfully revere the many Saints there, Saints of Ecumenical Orthodoxy). Let us proceed!