The Priesthood in the Old and New Testament 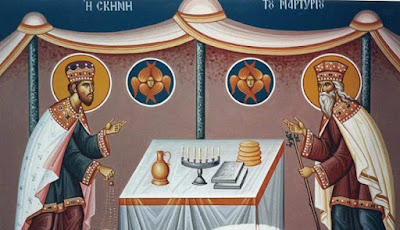 By Grigoris Sachinoglou
The concept of the priesthood exists in the Old Testament, but has a different meaning and character from that which we receive in the New Testament. In the Old Testament period before Moses, every head of the family could offer sacrifices to God, as there are many examples of people making sacrifices, such as Noah after the flood to express his gratitude to God for his salvation (Gen. 8:20), as well as Abraham and his sons. There are also those in leadership positions, such as Melchizedek, who is presented as the King of Salem and a priest of the Most High, who offered a ritual blessing to Abraham (Gen. 14:18-20).

The institution of the priesthood is essentially established in the years of Moses, who defined the tribe of Levi as responsible for the proper observance of the religious duties of the people, while the family of Aaron and his descendants are chosen by God Himself for the performance of priestly liturgical functions. Chapter 16 of the Book of Numbers describes the process by which God chose Aaron as high priest and as leader of the tribe of Levi after his staff blossomed. Therefore, all the priests then came from the descendants of Aaron, thus making the priesthood hereditary and the descendants of Aaron hierarchically superior, since, among other things, he acquired rights to sacrifices and sacrificial meals.

The priests of the Old Testament were those who approached God, were the mediators between God and man, guarded and handled the things of God (such as the Ark of the Covenant), who prayed, offered, sacrificed and purified all the people. To them, and through them throughout Israel, the divine commandments are transmitted, while they themselves must be pure and clean (Lev. 11). They received the priesthood by anointing from Moses, who acted in the name of God. This ceremony took place in front of the holy tabernacle, in the presence of the people. Both Aaron and his descendants were first symbolically cleansed with water (Lev. 8:6), then took off their clothes and put on special vestments, which they used in the performance of their priestly duties. Moses himself anointed the candidates with oil with which he sanctified the holy tabernacle of testimony (Leviticus 8:10-15). The priests were not to drink alcohol before entering the tabernacle, when they had the duty to separate the clean animals and things from the unclean ones (Lev. 10: 9-10). They were also to pray for the forgiveness of human sins, to teach the children of Israel the commandments God gave to Moses (Lev. 10:11-12), and to be concerned about the health of the people (Lev. 13).

The person of Melchizedek is of particular importance for the New Testament, as he is the model of the priesthood of Christ, which combines royal and priestly majesty and which is considered superior to the priesthood of Aaron, as Melchizedek bears a type of the priestly capacity of the Messiah (according to the Psalm 109(10):4 - "You are a priest forever according to the order of Melchizedek") and is a person who suddenly appears in the Old Testament, that is, without the usual genealogy. 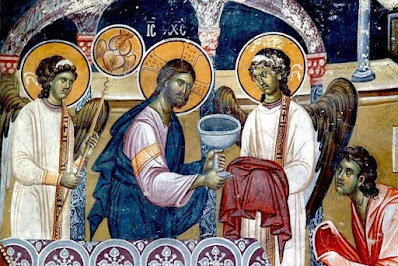 The Apostle Paul's epistle to the Hebrews makes extensive reference to the person of Jesus, His redemptive work, and His priesthood. Christ, like the priests of the Old Testament, becomes High Priest for the sake of men to offer gifts and sacrifices for our sins (Heb. 5:1). However, the priesthood of the Old Testament is not the same as that of Christ, as the previous one prepared and foreshadowed the other.

According to the Apostle Paul, Christ received His priesthood from God Himself and is not compared to Aaron, being of course superior to him, since God the Father Himself made Him High Priest and it is an eternal, perpetual and non-transferable (non-hereditary) priesthood (Heb. 7:24). Jesus is a High Priest "according to the order of Melchizedek", which is superior to the priesthood of Aaron, as Melchizedek has neither father nor mother nor genealogy - unlike the other kings - and thus he is an eternal priest and a complete symbol of the eternal High Priest Christ (Heb. 7:3). At the same time, the concession of a tenth of the spoils offered by Abraham to the king-priest Melchizedek (Gen. 14:20) emphasizes the inferiority of the priesthood of the Levite Aaron (as a descendant of Abraham) to the priesthood of Melchizedek and therefore of Jesus (Heb. 7:4).

Christ is the High Priest, who is holy, blameless, undefiled, separated from sinners, and exalted above the heavens, who does not need to offer sacrifices every day for His sins and the sins of the people, as the high priests do, and as He did once, when He offered Himself (Heb. 7:26-27). He sat at the right hand of the throne of majesty in the heavens and became a minister of the saints who are in the heavens, "and of the true tabernacle, which the Lord pitched, and not man" (Heb. 8:1-2), which is a type and symbol of the old tabernacle of Israel (Heb. 9:9). Thus, Christ as High Priest carries the full divine priesthood of which all Christians (general priesthood) and the ministers of the Most High (special priesthood) share.

The priesthood of Christ has three offices: priestly, royal, and prophetic. Jesus holds the priestly office and as a priest He once performed the supreme sacrifice, which is clearly superior to those of the Old Testament. He is "the offerer and the offered", the One who sacrificed Himself for the salvation of men, took upon Himself the sins of men and made them perfect (Heb. 10:12-14). He also has the royal office, for "Christ is priest and king, as priest offering Himself as a sacrifice for us, and as king ruling over sin and death" (St. Athanasius the Great), and we should not forget He is the head of the Church (Eph. 5:23) and the leader of our salvation (Heb. 2:10). He also has the prophetic office, as He teaches and legislates, proclaims the truth of God, enlightens the minds of men and does so in conjunction with the royal office, since He now has supreme authority and prestige and characteristically says "I say unto you" (Matt. 5:22 et seq.).

This priesthood was received by the apostles from Christ Himself after His resurrection during the period of His forty day earthly presence. Then Christ, in addition to teaching the disciples "about the kingdom of God" (Acts 1:3), gave them the Holy Spirit and at the same time the power whether to forgive sins or not (Jn. 20:22-23). He also conveyed to them the offices that accompany His priesthood: the priestly to perform rituals, namely the mysteries; the royal to have the authority to shepherd the Church; and the prophetic to have the power to preach the gospel.

The Apostles, therefore, received the priesthood and the command to continue the work of Christ throughout the world "until the end of the age" (Matt. 28:20) and therefore should leave successors and people to continue the priesthood and their work. Thus, they proceeded to transmit the priestly grace through the ordination of deacons and presbyters, as they did for example with Stephen, Titus and Timothy, so that they could administer and serve the Churches that were established and their flock, while ordering them to ordain in turn the new successors to continue the commandments of Christ ("go therefore", "make disciples", "baptize", "teach", "do this", etc.) in perpetuity.
Source: Translated by John Sanidopoulos.
John at 12:18:00 PM
Share
‹
›
Home
View web version