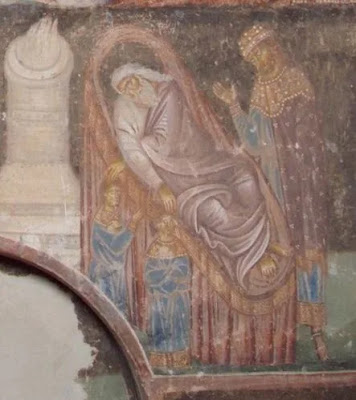 When Israel [Jacob] saw the sons of Joseph, he asked, “Who are these?”

“They are the sons God has given me here,” Joseph said to his father.

Then Israel said, “Bring them to me so I may bless them.”

Now Israel’s eyes were failing because of old age, and he could hardly see. So Joseph brought his sons close to him, and his father kissed them and embraced them.

Israel said to Joseph, “I never expected to see your face again, and now God has allowed me to see your children too.”

Then Joseph removed them from Israel’s knees and bowed down with his face to the ground. And Joseph took both of them, Ephraim on his right toward Israel’s left hand and Manasseh on his left toward Israel’s right hand, and brought them close to him. But Israel reached out his right hand and put it on Ephraim’s head, though he was the younger, and crossing his arms, he put his left hand on Manasseh’s head, even though Manasseh was the firstborn.

Then he blessed Joseph and said,

“May the God before whom my fathers
Abraham and Isaac walked faithfully,
the God who has been my shepherd
all my life to this day,
the Angel who has delivered me from all harm
—may he bless these boys.
May they be called by my name
and the names of my fathers Abraham and Isaac,
and may they increase greatly
on the earth.”

“In your name will Israel pronounce this blessing:
‘May God make you like Ephraim and Manasseh.’”

"Here too the cross is clearly symbolized to depict that mystery with which Israel the firstborn departed, just as Manasseh the firstborn, and the peoples increase in the manner of Ephraim the younger."

We read further in St. Ambrose of Milan:

"What extraordinary mysteries there are in this! Joseph took his sons, who were born to him in Egypt, and brought them before his father. He placed Ephraim at his right, but at the left of his father Israel, and Manasseh at his left, but at Israel’s right. But Israel, stretching out his right hand, put it on Ephraim’s head, although he was the younger son and stood at his grandfather’s left. And he put his left hand on Manasseh, who was at his right, and with his hands crossed so, he blessed them. In this Joseph observed the order of nature, to grant more to the elder son. Likewise Isaac also desired to give his blessing to Esau, the first son, but Jacob believed the younger son was to be preferred as a symbol of the younger people, just as he himself had been preferred by his mother. Indeed, in our tongue, Manasseh signifies 'out of forgetfulness,' because the people of the Jews forgot their God, who made them, and whoever from out of that people believes is called back, as it were, from forgetfulness. Moreover, Ephraim promises fruitfulness in faith by the meaning of his name, 'who made his father to grow,' just as Joseph himself says, 'because God has made me to grow in the land of my humiliation.' This refers especially to the younger people, which are the body of Christ, making its Father to grow and not forsaking its own God.

Indeed, the old man Jacob stated that this mystery referred in a spiritual sense to the peoples. For since his son Joseph thought that he had made a mistake from a defect in his vision, which was a bit dim, he wanted to change the position of his hands, saying, 'Not so, father, for this is the firstborn; put your right hand on his head.’ But he refused and said, ‘I know, son, I know. He too shall become a people, he too shall be exalted, but his younger brother shall be greater than he, and his seed will be a multitude of nations.’ Yes, by the order also in which he gave his blessing, Jacob prophesied that Ephraim was to be preferred to the elder brother, for he said, 'In you Israel will be blessed, and it will be said, May God do to you as to Ephraim and Manasseh.’ And so, although they were grandsons, they were adopted into the place of sons, so that they would not be deprived of their grandfather’s blessing."
John at 9:18:00 AM
Share
‹
›
Home
View web version