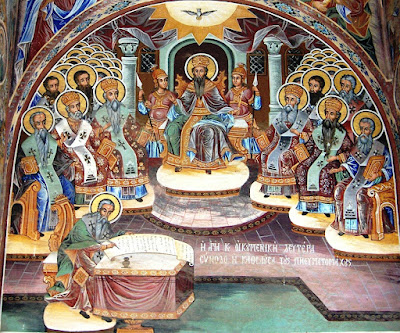 Homilies on the Ecumenical Synods

By Metropolitan Hierotheos of Nafpaktos and Agiou Vlasiou
After the First Ecumenical Synod, of which I spoke briefly last Sunday, beloved brethren, many ecclesiastical events took place, there was great unrest in the Church. Mainly because in the Symbol of Faith, drafted by the First Ecumenical Synod, the word "homoousios" (ὁμοούσιος, "of the same essence") was included, that the Son is "homoousios with the Father". This word "homoousios" was used by the heretics, who had received it from philosophy, and had other meanings. The Fathers, however, used it in the orthodox sense, to explain that the Word has the same essence as the Father.

Thus, after the First Ecumenical Synnod, the Christians were divided into various groups, namely: the Homoousians, who supported the Creed of Nicaea with the term "homoousios"; the Homoiousians, who held that the Son was not of the same essence as the Father, rather the essence was similar; the Anomians, who held that the Son had a dissimilar essence with the Father; the Heteroousians, who said that the Son had a different essence from the Father. Also, there appeared other heretics, who argued that the Holy Spirit is not God, but a creature, the so-called Pneumatomachoi. For this reason, the Second Ecumenical Synod convened in the year 381 in Constantinople to address these issues.

If we examine the events that took place between the First and the Second Ecumenical Synod, that is, the fifty-six years from 325 to 381, we will see that about thirty Synods of Bishops were convened, many of which issued various creedal texts. In other words, there was a great upheaval in the Church and an intense theological dialogue about the terms they used.

Today in our theology and worship the phrase "three hypostaseis and one essence" has prevailed for the Holy Trinity. That is, the essence refers to what is common of the Three Persons of the Holy Trinity, while hypostasis refers to each separate Person of the Holy Trinity. Various heresies manifested themselves during this period, because until then, as it appears in the First Ecumenical Synod, the word "essence" was identified with the word "hypostasis", which created problems in theology about the Triune God. For, since the essence was identified with the hypostasis, it meant that one is God, the Father, while the Son and the Holy Spirit are not an hypostasis or separate persons, but are the energies of God, the methods used by the one God to manifest Himself. Therefore God is able to change persons so that at one point He can appear as the Father, at another time as the Son, or at another time as the Holy Spirit.

Basil the Great, like Saint Gregory the Theologian, then made the distinction between essence and hypostasis, a distinction that we use today in our worship and theology, and they said that three are the Persons of the Holy Trinity - Father, Son and Holy Spirit - and they have the same essence. That is, the essence is common to the Persons of the Holy Trinity, while the hypostasis is "each separately" the same. This distinction between essence and hypostasis was also accepted by Athanasius the Great and the theological matters were solved.

This Synod condemned the heretics who did not accept the decisions of the First Ecumenical Synod, and others who in the meantime had appeared, such as the Pneumatomachoi, Eunomians, Apollinarians and others. They redrafted and reformed in a few points the Symbol of Faith of the First Ecumenical Synod. They also added the other articles to the Creed, which refer to the Holy Spirit, to the One, Holy, Catholic and Apostolic Church, to baptism, to the resurrection of the dead, and to eternal life.

This is the Symbol of Faith that we confess in the Divine Liturgy and in every service, and which includes all the basic issues of our faith. It has since been called the Nicene-Constantinopolitan Creed, because it is the decisions of the two Ecumenical Synods, the First and the Second.

The important thing that should be emphasized here is that at this Synod the difference between philosophical theology and empirical theology became very apparent. The heretics were influenced by the philosophy of Plato and Aristotle and tried with reason to understand that God is one and at the same time three, while the Fathers of the Church theologized on the basis of the revelation of Christ, as well as the experiences of the Prophets, the Apostles and those who belonged to them. That is why the Fathers in their works constantly used passages from the revelation and manifestation of the Son and Word of God, to the Prophets as pre-incarnate and to the Apostles as incarnate. And they interpreted them based on their own experience. The manifestations of the Triune God in the Jordan River and on Mount Tabor and in other events of the earthly life of Christ.

We must keep the Symbol of Faith pure, always read it, stand with reverence when we hear it, learn it by heart and say it often, because it is the fruit of the Holy Spirit, since it was the Holy Spirit who inspired the Holy Fathers and the first two Ecumenical Synods to draft it and it is the foundation of our salvation.