Recapitulation According to Saint Irenaeus of Lyon 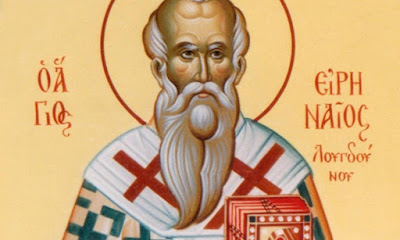 By Archimandrite Michael Stathakis
The work of the Asia Minor born St. Irenaeus, Bishop of Lyon, could be considered as an intersection but also as a foundation in patristic and theological thought. St. Irenaeus left as a legacy to the Church and to the generations after him, theological truths, which formed the foundation on which all the later theology of the Fathers and the Ecumenical Synods was based.

An in-depth scholar of Holy Scripture and Tradition, Irenaeus is the first to realize the historical continuity and the inextricable link between the real events of the Old and New Testaments. In his attempt to combat Gnosticism and its influence on Christianity, he interprets the narrated events of the Scriptures realistically and teleologically as a whole, because he is the first to realize their salvific significance. It is worth noting that until then the role of Christ in the salvation of man was considered, even by Christian apologists, to improve, aid and complement the general human weakness.

The idea of recapitulation is formed in his theological thought. Irenaeus calls the whole of the divine economy and the salvation of man by Christ a recapitulation. Adam fails in his divine mission; equipped with the gifts of freedom, judgment, will, self-determination, in the image of his creator God, he fails to resemble his creator as being infinitely better and is led through Eve to disobedience, to the fall and in the inability to deify his nature, according to the command he received from God.

Christ comes to heal this weakness and all that springs from it. Through the Theotokos, who assumes the role of the new Eve, that is, the mother of the new humanity, he assumes the human nature of Adam and unites it, as we know, unmistakably with the divine. His life, as accurately described in the Scriptures, has a realistic impact on the life of every person who wants to be like the model of the new man proposed by Christ. In essence, Christ comes and creates a new creation, in which He projects Himself as an unsurpassed model. Christ is the ultimate new man. Christ projects Himself as the ultimate spiritual man. Christ projects to us the perfect man, just as the Creator Himself would have liked us to attain from the beginning.

But the insurmountable example of Christ alone is not enough. He proposes to us the new unsurpassed model of the new man and at the same time gives us the opportunity to participate in it. It enables man to freely participate and change his nature inherited from the first Adam. Through baptism and the communion of the true Body and Blood of Christ, man is born into the recapitulated new creation. The baptism and communion of the Body and Blood of Christ are the only realistic key for man to participate in the true Christ and the true resurrection of the dead.

Saint Irenaeus, realizing that the historical time is over and that God Himself is before it and after it, knowing the future as coming after it, expresses the position that the final phase of the recapitulation, that is, the renewal in Christ of creation and restart of our nature will be completed post-historically, at the Second Coming of the New Adam.