By Hegumen Damaskin (Orlovsky)
Maxim Ivanovich Rumyantsev was born in the mid-fifties of the 19th century in the village of Vandyshki in the Kineshma District of the Kostroma province to a peasant family. His parents Ivan and Anna died when Maxim was barely ten years old, and he settled in the house of his brother Yegor and his wife Elizabeth, where he lived until he was fifteen, and at fifteen he left to wander. Where and how Maxim wandered is unknown, but after returning home almost thirty years later, he knew the church services by heart, although he remained illiterate; during his wanderings, he accepted the feat of foolishness, which he did not abandon until his death.

Returning to his native village, Maxim Ivanovich lived with his brother, then with the pious Gruzdev family, who revered the blessed one, then with the Kocherin family, or wherever God would lead.

"Why are you, Maxim Ivanovich, sitting in clothes?" he asked.

"You yourself told me to take a steam bath, and not to wash," the blessed one answered, smiling.

In the village, many, especially at first, laughed at him, and the boys used to throw stones at him. But the blessed one bore all this patiently, remembering that all who struggle for Christ will be persecuted.

By the time he settled in the village after a long feat of wandering and foolishness, he reached the shores of blessed dispassion, and the Lord began to reveal to him His good will about other people.

Despondency and sadness took possession of Andrei Gruzdev when the time came for him to go to the war of 1914.

“Farewell, Maxim Ivanovich, maybe I won't be back,” he said, going up to the holy fool.

"Goodbye, sweet master," answered Maxim Ivanovich. The Lord adorned the blessed one with many miracles, so that Andrei had no doubt he would return alive. And he did returned.

To the youngest daughter of the Gruzdevs, when she was a girl, Maxim Ivanovich often said:

"Nikolai, let's smoke. Nikolay, let's have a smoke." And then he would suddenly start running, saying:

Everything was explained many years later, when she married Nikolai, and when he was drunk, he pursued her, so that she did not know where to hide from him.

Maxim Ivanovich never spoke directly to a person, but always, as it were, about himself. Once the priest Gregory Averin came to Maxim Ivanovich, and the blessed one said to him:

"Here Maxim Ivanovich will soon be taken away. Soon they will pick him up - but that's okay. Maxim will die, and a nightingale will fly, but will not sit on the grave and sing."

Soon after Fr. Gregory was arrested and shot in the camp.

If the blessed one spoke directly about events, it would be only when it was impossible otherwise.

"Here, the smoke has gone."

But nobody paid attention to it. Maxim Ivanovich after a while more insistently said:

But again no one paid attention to his words, and then Maxim Ivanovich shouted:

It was impossible to deceive or hide anything from Maxim Ivanovich.

Once, when the blessed one was living with the Gruzdevs, the mistress of the house, for the sake of her illness and family needs, took biscuits from him from the bag that he kept on the stove. “I'll take a little, Maxim won't recognize,” she decided.

But Maxim Ivanovich, as he entered the house, grabbed his head and shouted:

"Stole! Stole! You have no place to live. Stole!"

Once Olga Dobretsova came to Maxim, with her a woman gave a bundle for the blessed one. Olga gave Maxim Ivanovich two packages and did not say which one from whom, considering it unimportant.
But the blessed one looked at it differently.

“This is yours,” he said, “and this was passed on through you."

“Forgive me, forgive me,” said the blessed one, “it's good that you confessed, otherwise they will lie and not confess."

Another time, when she was about to leave, he said:

"You stay, otherwise people are evil ..."

She disobeyed and went. It was necessary to go to a remote place. Olga then saw men standing who would not let her through. She ran. The men follow her. She ran with all her might, and they caught up, their stomping was clearer and clearer, then right behind her. And Olga begged blessed Maxim for help. He heard her, and the men stopped pursuing her. Barely alive from fear she got to the hostel where she was staying.

Olga never told the blessed one the details of her life in the hostel, where she had no bed, but she slept on the floor, using her coat for a pillow.

This coat was soon stolen, about which the blessed one told her:

"These are the evil people, the coat was stolen. But don't be upset." Soon Olga found money on the ground, which was just enough to buy a coat.

It happened that Maxim Ivanovich did not go to spend the night with anyone, but sat down with his sack in the middle of the street and sat there for several days. One winter he sat like that for a week. And one woman took pity on him, heated the bathhouse and came to persuade the blessed one to enter:

"Well, come on a sled, so I can put my bags on them," he said as he agreed. She came with a sled, put the sacks of the blessed one on them and tried to push them, but the sled did not budge. She tried again, and couldn't move them.

"Maxim Ivanovich, the sled is not going."

“They don’t go,” he shook his head and gently nudged the sled himself. And immediately it moved and went easily.

Once, when the blessed one was staying with the Gruzdevs, he began to sing the funeral stichera from the very morning and sang them almost all day. The hostess listened, wondering when he would finish, and finally asked:

"Why are you singing all the funeral stichera?" Maxim did not answer, continuing to sing, and after a while, having finished singing, he said:

"Well, now that's it. Lowered into the grave."

Soon they came from the Kineshma Dormition Monastery and said that a nun had died in the monastery.

Somehow, before the persecution began, the blessed one, passing by the Kineshma Monastery, said:

- "Are they nuns? Everything will fly apart. Everything."

In the mid-twenties, the monastery was closed, and an investigatory prison was located in its buildings.

Maxim's heart did not stick to anything earthly; he despised money, and if anyone gave it to him, he will rub it, and even throw it or put it somewhere.

Once a neighbor of the Gruzdevs ran to Maxim Ivanovich:

"Maxim Ivanovich, they are taking away our land!"

"So what?" the blessed one answered calmly. "Is it a pity, or what?"

"Oh, you, if it's a pity," the blessed one shook his head, "then take the earth in your pocket and go, since you feel sorry for it." 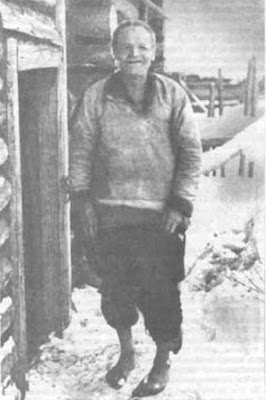 Maxim Ivanovich had a spiritually close relationship with Bishop Vasily of Kineshma.

"I have seen many ascetics and spiritual people," said the Bishop about him, "but this one is closest to God."

Vladyka Vasily went to see blessed Maxim Ivanovich on foot. And whenever he thought of coming, Maxim Ivanovich always knew in advance about his visit. Once he warned the hostess about his arrival, and she rushed to clean the house.

But before the Bishop had time to enter, the blessed one himself showed him the place to sit:

"You, Vladyka, sit here on the threshold."

"Here for him ... here ... Sit down, sit down here!" persistently repeated the blessed one, pointing to the threshold.

The Bishop did not object.

This was not long before the arrest of the bishop.

Once Maxim Ivanovich conveyed through his relatives to the Bishop that he would like to receive the Holy Communion.

On the appointed day, Bishop Vasily came to the blessed one. He sat and waited. Maxim Ivanovich was talking with the peasants at this time. They offered him a smoke, and he did not refuse, so he lit up.

Seeing that his expectation was in vain, the Bishop sent his cell attendant for him, and when Maxim Ivanovich came, he sternly asked:

"Have you eaten anything?"

"I ate a little," the blessed one replied, as if he had been waiting for this question, and added: "You are painfully strict, Vladyka, I have eaten quite a bit, a little bit, and there will be a time when we will eat communion."

"Is he talking about the future? Isn't this a disregard for the holy thing?" thought the Bishop, himself a strict ascetic and an adherent of church canons. He therefore told his spiritual children to postpone turning to the blessed one for advice.

After a while, Maxim Ivanovich again called Vladyka to him to receive communion.

“I didn’t eat, I didn’t drink, holy Vladyka,” answered the blessed one.

After confession, all doubts of the Bishop were dispelled, and he again blessed his spiritual children to turn to the blessed one for advice.

Many, seeing what kind of life he was leading, said to him:

Shortly before his arrest, Maxim Ivanovich came to Fr. Nikolai Zhitnikov and said:

Indeed, both of them were soon arrested.

The chairman of the first collective farm in those places was Vasily Sorokin, and his son, Vladimir, worked as a tractor driver on the collective farm. Both of them did not like the blessed one and wrote denunciations to the authorities so that they should arrest him.*

And finally, in the winter of 1928, a sleigh with a policeman drove up to the house where Maxim Ivanovich lived then.

Andrei Gruzdev, who happened to be there, asked:

"Why are you arresting him?"

Maxim Ivanovich had nothing to collect, he had no property, he got into the sleigh, and they set off. On the way, they met a woman who, recognizing the blessed one, asked:

"Where are you going, Maxim Ivanovich?"

"To the Tsar for dinner," answered the blessed one.

In the Kineshma prison, Maxim Ivanovich was subjected to cruel torture, alternately being held in the heat, then in the cold. But he did not stay there for long and was transferred to another city. There the blessed one found himself with Fr. Nikolai Zhitnikov, who witnessed his death, and wrote to the people of Kineshema that Blessed Maxim died as a great righteous man.**

Source: Martyrs, Confessors and Ascetics of Piety in the Russian Orthodox Church of the 20th century. Book 2."

* In October 1918, the Soviet government apparently drew attention to Maxim Ivanovich for the first time. The Vandyshevsky committee of the poor, in response to a request about those who are not engaged in personal labor, wrote to the Dupikh volost council that there were no such people in the village, "with the exception of the poorly intelligent Maxim Ivanovich Rumyantsev."

** He was numbered among the holy new martyrs and confessors of Russia at the Council of Bishops of the Russian Orthodox Church in August 2000.
John at 1:49:00 PM
Share
‹
›
Home
View web version