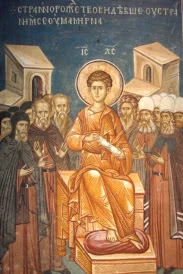 “Wisdom cries aloud in the street, in the open squares she raises her voice; down the crowded ways she calls out, at the city gates she utters her words” (Proverbs 1:20-21).
The Wisdom of God is the Lord Jesus Christ Himself, through Whom all that was created, was created. All that was created manifests its Omniscient Creator, both that which is in the field as well as that which is in the city. In a field is a pure and bright nature but in the city is man with his trades and skills. The Wisdom of God cries out and does not whisper throughout all of nature and through all beneficial trades and skills of man. She [Wisdom] covered all the fields, she filled the entire city and she is above the earth and under the earth, in the heights of the stars and in the depths of the seas. He who wants to hear her can hear her in every place; he who wants to learn from her and to be delighted by her can be taught and delighted in every place; he who wants to be corrected and built up by her can be corrected and built up by her in every place.

But, the Wisdom of God is most audible and most obvious in the person of the Lord Jesus Christ Himself. In the person of the Lord Jesus Christ, the Wisdom of God was manifested in the flesh and demonstrated to men in its miraculous power and beauty. This Wisdom of God does not speak through things nor through men, but speaks of itself and from itself alone, personally and directly. By His wisdom the Lord filled the entire world through His Holy Church, so that it can be said that just as twenty centuries ago in Palestine so, He today, through the servants of the Word cries out in the fields, on the streets, to the greatest throngs in the world, throughout all the cities and before all doors.

O my brethren, let us open the doors of our souls to the Wisdom of God Incarnate in the Lord Jesus Christ!

O Lord Jesus, Wisdom and Power of God, open our souls and abide in them. To You be glory and thanks always. Amen.
John at 11:59:00 AM
Share
‹
›
Home
View web version