The Power of Saying the Salutations to the Mother of God 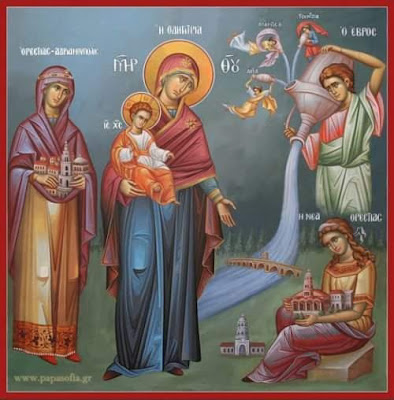 Many years ago there was a pious family that lived in a rural area. Because they were not very well educated, they used to pray aloud in the house with the Archangelic Salutation (Hail Mary Full of Grace), and this very Salutation was heard by the youngest son of the family from his childhood, who kept repeating it, whether he was in the house or playing out in the field.

One day when he was a little older, he went to play with the other children near the river that passed by their village.

Careless as he was he slipped and fell into the river.

And as it was winter and the waters were swollen the little one, who unfortunately did not know how to swim, was quickly swept away by the rushing waters.

The other children started shouting for help, and the villagers immediately ran and some even dived into the river and swam in their attempt to find the child.

Meanwhile, the mother was notified and full of anxiety she also ran to the spot where her little son had fallen into the river.

Time passed and the little one did not give a sign of life.

Some people started looking on both banks of the river to collect the dead body of the boy, since they were now convinced that the little one would have drowned.

Only his mother had her hope in the Theotokos and with tears in her eyes she begged her to do her miracle and to give her back her child.

And O the paradoxical miracle!

They saw at the far end of the river, a figure emerging, coming against the current of the river.

When he approached, they could see the little one floating on the river, with his clothes dry and smiling happily, clapping his hands happily!

Both the mother and the others dived into the water and the little one was lost in the embrace of his mother, who, full of tears, thanked our Panagia for her miracle!

"But why are you crying, my mommy?" the little one asked in astonishment!

"My child, you were gone for so long we thought you drowned and lost you forever!"

“Oh my mommy!" the little one answered calmly, "when I fell into the water I felt two hands lift me up. I turned and saw our Panagia holding me in her arms, and all this time I was with her! And you know, mommy, we played together. I saluted her as you have taught me and as I have done since I was a baby. I kept telling her 'Hail Mary Full of Grace!' and she, smiling, replied to me, 'The Lord is with you!'"