The Mystical Journey of the Christian, Through the Desert, Towards the Resurrection and Pentecost (5 of 5) 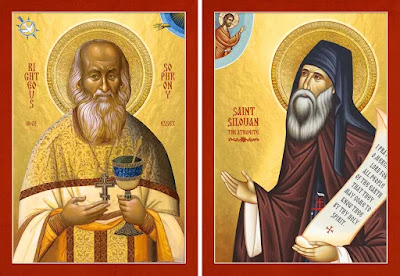 The Orthodox monk feels that Divine Grace, from a theological point of view, "is God's good gift, or a gift of God's goodness - the uncreated supra-human and meta-cosmic energy of Divinity." "When it is God’s good pleasure to unite with the human being, man perceives within himself the action of a Divine force which transfigures him and makes him no longer just potentially godlike—in the image of God—but actually godlike in likeness of being.​ The grace that is Divinity hallows man, divinizes him, makes him into a god."

The assimilation of divine Grace, after many visits and observations, offers a "form of spiritual knowledge" and this is characterized as "dogmatic consciousness". This "dogmatic consciousness" "is the result of a long experience of grace and not a mental work", it is the spiritual knowledge connected with the "genuine life in God" that is possible only "when God dwells within us".

Thus, we understand what is the essential difference between a thinker and a theologian, between a philosophical heretic and an empirical theologian, or a Father, between "scholastic dissertations" and hesychastic charismatic theology, but we also understand the manner by which the Fathers of the Church of the Ecumenical Synods theologized and do theology. A characteristic feature of the Holy Fathers is the "dogmatic consciousness".

9. "On Clairvoyance and its Different Forms"

The ascetic in the course of his spiritual life acquires the gift of clairvoyance that comes from his struggle against thoughts, the imagination and the passions, from the influence of demons, but also from the absence of Divine Grace. Thus, "the ascetic encounters three aspects of clairvoyance."

"The first, the devout and humble man may find useful and good, since it connects with a more sensitive keeping of Christ's commandments concerning one's neighbor. It will be harmful to the proud and passionate individual as it affords opportunities for the passions and opens up further possibilities for their satisfaction.

The second, the work of demons, is extraordinarily dangerous for anyone susceptible to it, since sooner or later it will lead to painful violation of man's whole psychological and spiritual strength, distorting his very personality.

The third, the gift of grace, entails the utmost responsibility and is the source of great spiritual suffering. It is in no wise accorded to the proud man.

All three of these types of clairvoyance cause suffering. With the first - natural intuition - suffering follows as the consequence of increased sensibility of the nervous system. With the second,it is the destructive, on the whole ruinous nature of demonic action that not seldom becomes apparent only in the long run. Though this intuition may sometimes enable one to read someone else's mind, his inner self still remains inaccessible. Clairvoyance may be more reliable where outside events are concerned. It affords occasions for self-conceit to those who adopt it."

This shows the great gift of the existence of spiritual fathers, of high spiritual standards, as compiled by the Grace of God, who guide their spiritual children without error through various wicked situations in deification and "the exalted luminosity".

10. "On the Purport of Prayer for the World" and "Love for Enemies"

Consistent and in continuity with all the above, the ascetic who goes through these situations prays for the whole world. Experiencing "Christ's love", participating in eternity in the vision of uncreated Light, but also going through the trials, and in fact the charismatic pain of hell, he naturally begins to pray for the whole world, according to the example of Christ.

Usually, "prayer for the whole world, for all Adam, in many instances distracts the monk from putting himself at the service of individuals," because man in this state cannot reconcile this prayer with pastoral action in the world, so he withdraws to the wilderness and prays day and night to God for the people, living and reposed, for all of Adam. "To pray for people means to shed blood."

Such a prayer leads him to love for his enemies, because this love is "the criterion of genuine communion with God, the attribute of the energy of grace." Thus, the hesychast participates in the mystery of the Cross and the Resurrection of Christ.

This shows "the way of the Church". Saint Silouan said: "It is given to our Orthodox Church through the Holy Spirit to fathom the mysteries of God, and she is strong in the holiness of her thought and her patience." And Saint Sophrony points out: "The mystery of God which the Church understands in the Holy Spirit is the love of Christ. The holy thought of the Church is that all men should be saved. And the path she treads towards this holy end is the path of patience - that is, of sacrifice."

"In preaching the love of Christ to the world, the Church calls all men to the fullness of Divine life but people do not understand her call, and repudiate it. When she bids men keep Christ’s commandment and love their enemies, the Church finds herself caught between conflicting forces who naturally vent their anger upon her when she crosses their course. But the Church, actualizing Christ’s mission on earth – the salvation of the whole world – purposely takes upon herself the world’s anger, just as Christ took upon Himself the sins of the world. And as Christ was persecuted in this world of sin, and had to suffer, so the true Church of Christ must also be persecuted and suffer." This will be done with the real children of the Church who are the Saints.

The ten points mentioned above, and for their analysis the very words of Saint Sophrony were used, show the course of the true ascetic and hesychast, but also of the true Christian in a more moderate form, with a corresponding adjustment for his salvation. The word of God, as an energy enters him and begins to activate the mystery of salvation, activates the image that is within him and then he ascends the steps of the spiritual heavenly altar.

This means that by the energy of the word of God which is revealed in the heart, the ascetic and the Christian ascends the steps of the spiritual life, that is: with watchfulness he stops the development of intrusive thoughts; he struggles against the passions and the imagination; he practices mental silence and pure prayer; if it is God's will he comes to the vision of the uncreated Light; he goes through various trials when this great divine vision of Grace decreases; he acquires dogmatic consciousness; with the gift of clairvoyance he distinguishes between that which is created and that which is uncreated, the divine from the demonic; and lastly he prays for the whole world and even prays for his enemies.

This is the "Way of the Church", the Way of Holiness, these are the steps where the Saints ascend. And of course these steps were first ascended by Saint Silouan and then by Saint Sophrony. Thus, what has been mentioned above is, on the one hand, a theological analysis of the writings of Saint Silouan, and, on the other hand, an autobiography of Saint Sophrony himself.

This is how all the saints lived Holy and Great Lent, this glorious journey to the Cross and the Resurrection of Christ and then to Pentecost.