Saint Arsenios was born in Evrytania of Thessaly, specifically in the village of Kalogriana of Karditsa, in the year 1548, and was baptized with the name Apostolos. His father was a priest named Theodore and his mother was named Christodouli, who was the sister of Metropolitan Neophytos of Larissa and the niece of Saint Bessarion of Larissa. He had four older brothers - Joasaph (Bishop of Stagon), Mark (Bishop of Demetriada), as well as Athanasios and Pachomios (both hieromonks).

The father of Apostolos died in 1560, and his upbringing fell on the shoulders of his elder brother Joasaph, who gave the young Apostolos his initial education. His writings, language skills and tenure as a teacher show that he was very educated, though we have no details about this.

In 1572 Apostolos became a Monk and took the name Arsenios, and a few days later Metropolitan Jeremiah of Larissa, the future Ecumenical Patriarch, elevated him to the rank of Deacon. After the death of his elder brother Joasaph, Arsenios lived in the Dousikou Monastery, where in 1579 he became a Priest. At the end of 1579 he was appointed priest of the Patriarchal Church of Pammakaristos.

In the year 1584 Arsenios was elected Archbishop of Demonikos and Elassonos and succeeded Damaskenos II. In the same year he received the visit of the Ecumenical Patriarch Jeremiah II of Tranos, who was touring Roumeli and the Peloponnese. Patriarch Jeremiah was hosted in the Monastery of Panagia Olympiotissa.

The fact that around the year 1580 he operated a secret school in the Monastery of Panagia Olympiotissa, makes us believe that Saint Arsenios was keenly interested in the elementary education of the young people of his Diocese. That is why, in consultation and collaboration with the abbot and the monks of Olympiotissa, he organized this school and motivated and encouraged the Greek children of Elassonos, who were zealous for education, to go to the monastery and there to learn reading and writing based on the sacred texts.

With the blessing of Patriarch Theoleptos II, Saint Arsenios headed the embassy which left in 1586 from Greece to Moscow. The pious Tsar Theodore Ioannovich received Saint Arsenios and his companions very kindly. The Saint presented the king with patriarchal letters and gifts. A month later, Theodore Ioannovich released the ambassadors back to Constantinople, sending them generous alms to the Patriarch.

On the way back, the embassy stopped in Lviv, Ukraine. The local Orthodox Bishop Gideon (Balaban) urged Saint Arsenios to stay in Lviv and lead the fraternal school at the Dormition Church. The Orthodox Fraternal School in Lviv was formed to protect the Orthodox from Latin influence. The initiators of the fraternity realized that education was the best weapon to defend their faith. In Lviv there was also a large and prosperous Greek community, mainly merchants, including the Cretan wine merchant Konstantinos Korniaktos.

During his two-year stay in Lviv from 1586 to 1588, Arsenios compiled the curriculum for the school, the first rector of which he was. The "school order" of Saint Arsenios was created in the tradition of the Greek secret school and became one of the oldest school statutes in Europe. The charter was based on the idea of student equality. It emphasized that "the rich cannot be superior in anything to the poor in the school except regarding education." The charter stated that by noon the teacher should teach students not only reading and writing, but also grammar, rhetoric, dialectics, music, the Holy Gospel and the Books of the Apostles. For all these subjects, students were to be given notes, that is, handwritten textbooks. In the afternoon, computation, arithmetic and church singing were taught. In addition, on Saturday afternoons, the teacher was to converse with the children, instilling in them piety and explaining their Christian responsibilities to their parents and neighbors, and on holidays and Sundays, revealing the meaning of the feasts and the Gospel and Apostolic Reading accounts read in churches these days. Quite serious requirements were applied to the teacher. He was to be "pious, intelligent, not a drunkard, not a fornicator." Saint Arsenios' "school order" became a model for the statutes of other fraternal schools in Ukraine, Belarus and Lithuania, and the school he headed played an important role in the life of the Orthodox community of Lviv.

Saint Arsenios taught the Greek and Church Slavonic languages at the Lviv Fraternal School for two years and composed a bilingual grammar for it called Adelphotes, or Grammar of the Hellenistic Language. The Adelphotes of Saint Arsenios later served as a model for the creation of the widely known Russia grammar of Lawrence Zizanius (1596) and Meletius Smotritsky (1619).

In the year 1588 the Saint accompanied, together with Metropolitan Hierotheos of Monemvasia, the Patriarch of Constantinople Jeremiah II in Moscow, where on January 26, 1589 they proclaimed and installed Metropolitan Job as Patriarch of Vladimir, Moscow and All Russia and all the northern countries. The ceremony and the events of the enthronement of Metropolitan Job were described by Saint Arsenios with verses in the vernacular, titled "Effort and Dissertation of the Humble Archbishop Arsenios". Arsenios was given permission by the Tsar to stay in Moscow.

A stranger by origin and upbringing, Arsenios managed to gain a strong position in his second homeland, to earn the respect of all with whom he had to communicate. In late 1596 and early 1597, he became Archbishop of Arkhangelsk of the Kremlin's Archangel Cathedral and took an active part in the church life of Moscow. Saint Arsenios became famous for his charity. He built and decorated temples at his own expense, and made numerous contributions to Russian and Greek monasteries. During his long stay in Russia, Saint Arsenios did not forget his birthplace and the monasteries where he had probably spent his youth. He dedicated many books, icons and sacred utensils to the Monastery of Tatarna, to Meteora, to Sinai and other places.

Living in the Moscow Kremlin, near the Tsar's Palace, through all the years of the Time of Troubles (the period of the history of the Moscow Empire from 1598 to 1613) he witnessed the change of governments, popular riots, atrocities and looting by foreign invaders, saw terrible fires and deaths. Saving the miraculous Vladimir Icon of the Mother of God from the inevitable desecration by Polish invaders, Saint Arsenios hid it in a safe place. The Saint himself suffered the hardest trials: famine, hardship, disease.

During his illness, in a dream, he saw Saint Sergius of Radonezh, who said that the disaster would soon be over. As if to confirm the truth of the prophecy, the Saint received healing from his illness. And soon Moscow was liberated from the Poles by the army of Prince Dmitry Pozharsky and the burgher Kuzma Minin. At the head of the clergy, Saint Arsenios met the liberating troops at the Kremlin's Savior Gate with the Vladimir Icon of the Mother of God.

In 1613, in the liberated Moscow, Mikhail Feodorovich Romanov was elected tsar and was married. Saint Arsenios also took part in the festivities.

The last years of the life of Saint Arsenios are associated with Suzdal, where he held the chair of archbishop. Becoming Archbishop of Suzdal and Tarus in 1616, he continued to live in Moscow and moved to Suzdal only a few years later. Here the Saint also enjoyed common honor and love. More than once he petitioned the Tsar and the Patriarch to allocate funds for the restoration of churches destroyed during the Time of Troubles and made generous donations to the monastery. Shortly before his death, by order of Patriarch Philaret, he participated in the study of the miracles from the Kazan icon of the Mother of God. He also often corresponded with the Patriarch of Alexandria, Saint Meletios Pegas.

Saint Arsenios died on either April 13 (Greek) or April 29 (Russian), 1625 and was buried in the Cathedral of the Nativity of the Theotokos in the Kremlin of Suzdal. Immediately after his death, the Saint became famous as a miracle worker, at whose tomb many healings took place. The first uncovering of the relics of Saint Arsenios took place in 1668. In 1982, the Saint was numbered among the Saints. The relics of the Saint were uncovered for the second time on August 23, 2005. On February 22, 2015, the relics of Saint Arsenios were transferred from the Nativity Cathedral in the Kremlin of Suzdal to the Dormition Church in the city of Suzdal

On June 8, 2006 Patriarch Alexy of Moscow and All Russia gave Metropolitan Vasilios of Elassonos a portion of the relics of the Saint to bring back to Greece. They arrived on June 17th from Russia to Elassona and were received by Archbishop Christodoulos of Athens and All Greece. They were placed in the newly-built Church of Saint Arsenios of Elassonos in Elassona in a specially designed shrine. His feast in Elassona is celebrated on May 8th with a procession of the relics. 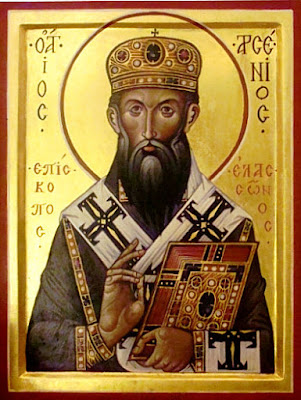 Apolytikion in the First Tone
To the shepherd of Elassonos the glory of Thessaly and the famous to all in Moscow, let us sing hymns O faithful, crying out with reverent longing to Arsenios; guard and protect forever Father the faithful who cry unto you: glory to Christ Who glorified you, glory to Him Who made you wondrous, glory to Him Who through you gifted us with grace and mercy. 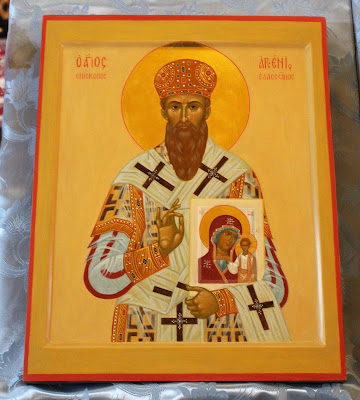 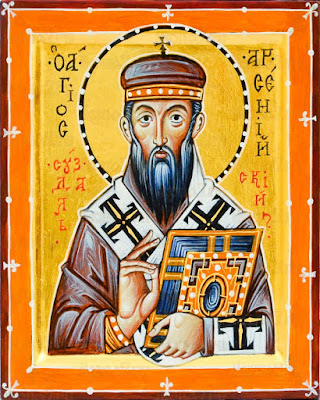 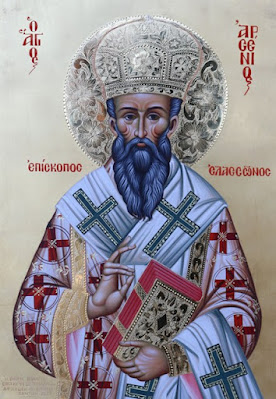 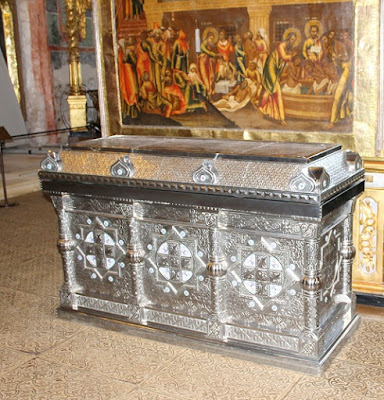 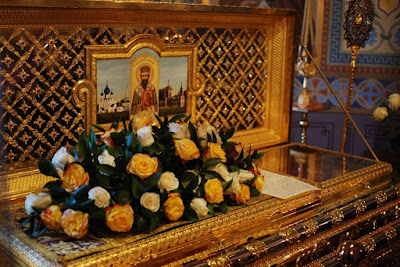 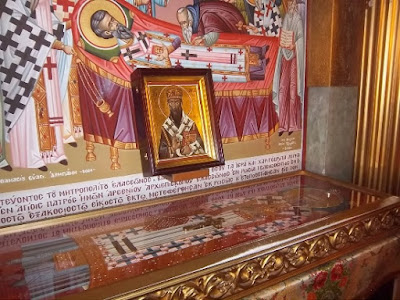 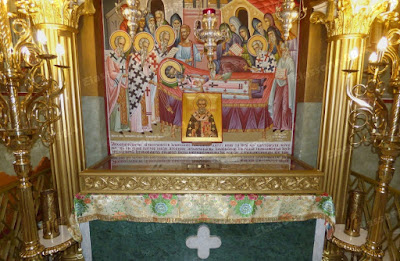 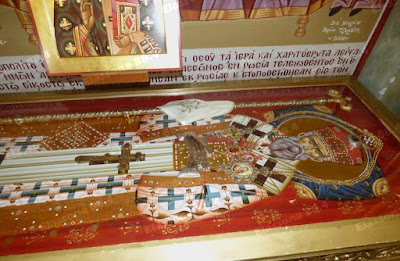 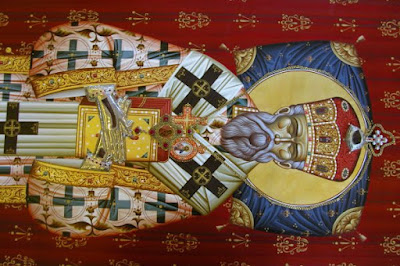 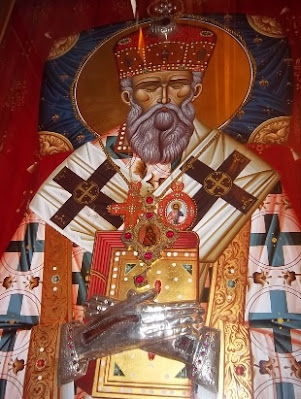 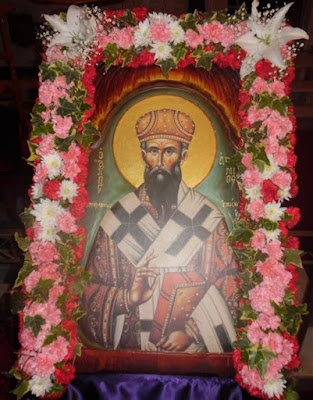