Holy Martyr Suchias and his Sixteen Companions in Georgia 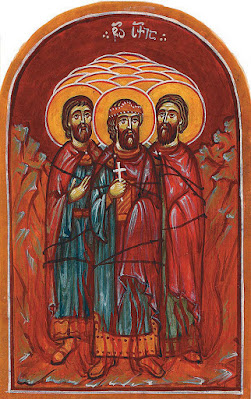 By Archpriest Zakaria Machitadze
The Holy Martyr Suchias (Sukia) and his Sixteen Companions in Georgia were illustrious dignitaries who served at the court of the Albanian (Hagbanite) ruler (i.e. “Caucasian Albania” on the present day territory of Azerbaizhan).

Escorting the Albanian ruler’s daughter Satenika, wife of the Armenian emperor Artaxar (88-123), Saint Suchias and his sixteen companions arrived in Artashat, the ancient capital of Armenia (the city was later destroyed by the Romans in the year 163).

Preaching there at the time was a Greek Christian named Chrysos, who had been enlightened and ordained by the holy Apostle Thaddeus (August 21). The Georgian dignitaries came to believe in Christ the Savior, and they resolved to devote their lives to the service of God. All seventeen of the newly-converted followed Chrysos into Mesopotamia. When Bishop Chrysos baptized them in the waters of the Euphrates, they were permitted to behold the Lord of Glory, Jesus Christ.

The holy martyrs set up a cross at the place of their Baptism and named it the “Cross of the Annunciation.” Bishop Chrysos gave all the saints new names: the eldest was called Suchias (replacing his old name Bagadras), and his companions were named Andrew, Anastasius, Talale, Theodoritus, Ivherion, Jordan, Kondrat, Lukian, Mimnenus, Nerangius, Polyeuctus, James, Phoka, Domentian, Victor and Zosimas.

After the martyric death of Bishop Chrysos, Saint Suchias became the spiritual leader of the brethren. All soon resettled in a wild locality on Mount Sukaketi, not far from the mountain village of Bagrevandi. Here the former dignitaries led very strict ascetic lives. The scant mountain vegetation served as their food, and they drank from a cold spring of water.

The new ruler of pagan Albania, Datianos, learned that his former officials had accepted Christianity and had gone into solitude. He sent his associate Barnapas with a detachment of soldiers to persuade them to return to court and return also to their former faith. Barnapas searched for Saint Suchias and his companions, but keeping their vow of service to God, they refused all entreaties.

Then by order of Barnapas, Saint Suchias and his companions were stretched out and nailed to the ground, and then burned. After this, their bodies were dismembered and scattered all about Mount Sukaketi, from which the martyrs received also the title the “Mesukevians” (more correctly, “Sukaketians”). This occurred in the year 123 (by another account, in the year 130; although an Athos manuscript of the eleventh century from the Ivḗron Monastery gives the year as 100).

The holy relics of the martyrs remained incorrupt and unburied until the fourth century, when they were placed in graves and consigned to the earth by local Christians (the names of the holy martyrs were found written on a cliff).

The holy hieromartyr Gregory, Enlightener of Armenia (September 30), built a church on this spot and established a monastery. And afterwards, a curative spring of water was discovered there.
John at 4:23:00 PM
Share
‹
›
Home
View web version