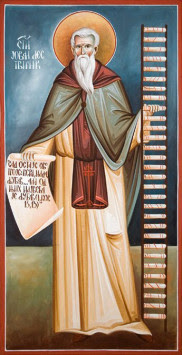 By Archimandrite Epiphanios Theodoropoulos
On this day we celebrate the memory of Saint John, the author of the Ladder.

Regarding him the Horologion says:

"He was born in Palestine around 523. From an early age he was given over to asceticism. He was made abbot of the Monastery at Mount Sinai. Thirty discourses were authored by him regarding the virtues; upon acquiring each virtue one progresses from praxis to theoria, with man ascending each step to heavenly heights, which is why this book is called Ladder of the virtues. He died in 603 at the age of eighty."

His memory is celebrated on the 30th of March, but his feast is repeated today, "perhaps because from the beginning of Holy Lent the customary reading of his discourses in the Ladder begins in the sacred monasteries," the Horologion goes on to say.

The troparion of Saint John is as follows:

"With the rivers of your tears you made the barren desert bloom; and with your sighs from deep within, you made your labors bear their fruits a hundredfold; and you became a star, illuminating the world by your miracles, O John, our venerable father, intercede with Christ our God, for the salvation of our souls."