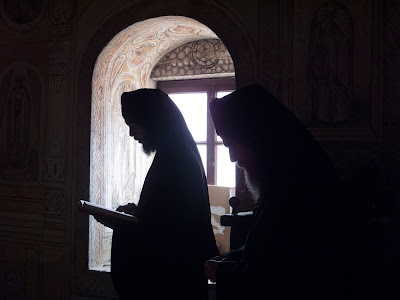 By Metropolitan Hierotheos of Nafpaktos and Agiou Vlasiou

"This kind can come out by nothing but prayer and fasting." (Mk. 9:29)
When asked by the disciples why they could not get the demon out of the young man who was being tormented "from childhood", the Lord answered that this kind, which according to Saint Gregory Palamas "was the terrible demon of licentiousness", cannot with any other means come out of man, except through prayer and fasting. And because for the one possessed by a demon it is difficult to pray and fast, those who want to heal the demon possessed must do so.

This answer of the Lord gives us today the opportunity to express some thoughts, on the one hand about Prayer and Fasting and on the other hand about the relationship that exists between Monasticism and Orthodoxy.

Prayer and fasting are necessary means for our liberation from all demonic tyranny and our return to God. Especially for this kind of demon, which as we mentioned consists of "strange and unpleasant eroticism", prayer and fasting are very powerful weapons. With fasting we restrain the body and suppress its revolts and with prayer we calm the thoughts that irritate the passions. In general, however, prayer and fasting play an important role in the life of the Christian, who struggles for his deification by Grace.

By fasting we experience the pre-fallen Paradise, when Adam had not yet disobeyed God's command. Also with fasting we experience the drama of the fall of man that took place with the transgression of the commandment and the loss of divine Grace. Saint Basil calls fasting an "elder of the Law", because it was given as a command even before the Law. With fasting we even experience some situations from the eschatological state of the righteous. This is because we know that in the life that will follow after the Second Coming of the Lord there will be no material needs and those who are grace-filled will rejoice in communion with Christ.

Also through prayer we truly experience communion with Christ. We can say that the spiritual life is expressed and manifested through prayer. There is a wonderful definition given by Saint John Climacus, according to which "prayer is the intercourse of man and God". Indeed, during prayer man enjoys "sober intoxication". He experiences the love of God. That is why the use of fasting and prayer is necessary for our purification and deification. This explains how all the Saints used and loved these spiritual means.

Usually people, justifying their wish to live according to their own will, claim that prayer and fasting are suitable means for monks who are dedicated to God and not so much for people who live and work in the world. With this erroneous thought there is a split in Christian ethics and a distortion of the gospel message.

It must be emphasized that monasticism is not entirely identical with the Church (in that it is not the only way of salvation) nor is it a form of life that later became entrenched in the Church and is a diversion. Monasticism is an expression of Orthodoxy. This can be seen in three features of Orthodoxy that clearly reveal the great truth that the Orthodox spirit is essentially monastic and that monastic life is Orthodox life.

a) Orthodoxy is ascetical

When we say ascetical life we mean mainly the evangelical life based on repentance, which is a necessary condition of Orthodox ethics. Asceticism, by the Grace of God, is man's effort to remain free from the domination that created things want to impose on him. Asceticism is the return of man to God. It is the liberation from the tyranny of the ego, the attempt to transcend individualism and to live personally. Also asceticism is the "submission of the individual to the universal experience of the Church" and obedience to all the commandments of the Church. Everyone can experience this, both the monks and those living in the world. In another sermon we have emphasized the truth that the three monastic vows can be kept by the married person with a similar adjustment. Marriage, when it has as its reference the mystery of the Eucharist and not when it simply receives the blessing for biological satisfaction, helps man to be saved.

b) The Orthodox way of life is communal or coenobitic

This means that the Orthodox Christian does not live alone, but with his brethren and for his brethren. Orthodoxy is the Church. This is what the Body of Christ and the spiritual (real) family means.

We see this in the Divine Eucharist which perfectly expresses the Church. In this supernatural mystery, everyone cooperates. We all become cooperators. Everything is common. Common prayer, common food, common life. Learning to live liturgically, we are called to participate in the great liturgy of the universe, that is, to consider everyone and everything as gifts of God to us and therefore to offer ourselves as a gift to them.

So the Christian life is a common life. Sorrow is common sorrow. Joy is common joy. Faith is the unity of faith. Love is the communion of love. We see this clearly expressed in the coenobitic monasteries. The monks have common food, clothing, prayer, spiritual guidance. But this common life, in proportion, can be lived by all Orthodox. To not feel alone and to not live only for themselves. To see the other as their brethren and to share in their pain. Of course, the coenobitic way of life presupposes the presence of the Holy Spirit. In the fallen world, characterized by the absence of the Holy Spirit, it is utopianistic to talk about coenobitic life.

The Orthodox Christian centers his life around the God-man, lives in the God-man and does not center his life around himself. We see this in monasticism. The center of the life of a monk is the Church. Worship and prayer are the basis. The monk eagerly seeks communion with Christ. This can be applied by any Orthodox Christian - to keep the will of God and for the rules of the Church to become his own rules.

In conclusion we can say that we can all experience the Orthodox spirit which is ascetic, coenobitic and God-centered, only the monks have greater potential. Monasticism is an expression of Orthodoxy. Even the monk who is least of all is a reaction to the spirit of secularization of modern man and a hope for those who seek a perfect society, where not just justice but love will reign.