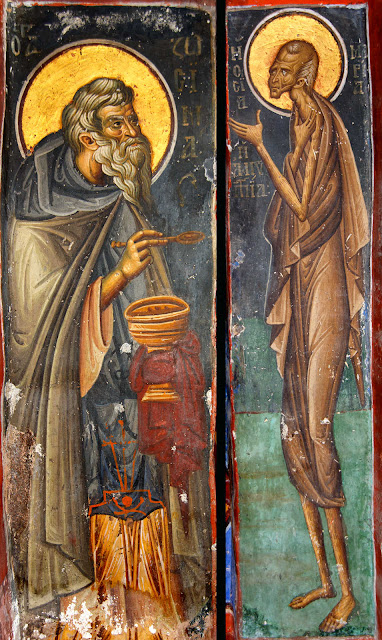 By Archimandrite Epiphanios Theodoropoulos
On this day we honor the memory of our Venerable Mother Mary of Egypt, who is celebrated on the 1st of April. As the Horologion says: "It was also established for today, as we approach the end of Holy Lent, to arouse the idle and sinful towards repentance, having as an example the celebrated Saint." From this same book we record the following about this holy woman.

"At the age of twelve she secretly left her parents and went to Alexandria, where she lived a prodigal life for seventeen years. Out of curiosity she went with many pilgrims to Jerusalem, to attend the festival of the Elevation of the Honorable Cross, where she gave herself over to all forms of debauchery and dragged many into the depths of destruction. Wanting to enter the church on the day when the Cross is elevated, she sensed three or four times an invisible force preventing her from entering, while at the same time a crowd of people was entering without hindrance. Her heart was wounded because of this, and she decided to change her life and make atonement to God through repentance; whereefore she returned again to the church and entered it without difficulty. Having venerated the Honorable Cross, she withdrew that same day from Jerusalem, crossed the Jordan, and entered the innermost desert, where she lived a most difficult and superhuman forty-seven years, by herself praying to God alone. Towards the end of her life she met a hermit whose name was Zosimas to whom she related her life story from the beginning, and asked him to provide for her the Immaculate Mysteries for communion; which he did the following year on Great Thursday. The next year Zosimas returned to find her dead lying on the ground with words written next to her that said: 'Abba Zosimas, bury here the body of wretched Mary. I died on the day I communed of the Immaculate Mysteries. Pray for me.' Her death took place either in the year 378 or according to others in the year 437."

Venerable Mary the Egyptian, together with Venerable Pelagia, Venerable Moses the Ethiopian, the sacred Augustine and others, are living examples of the power of repentance. People who were immersed in the mire of sin to their heads, later attained the purity of Angels! How great is the power of the Grace of God! Let us not despair, no matter how much we have immersed ourselves in sin. We are able once again to become thoroughly whitened, just as we were after our Baptism. All we have to do is repent!

"Having escaped the gloom of sin, O blest Mary, and shining brightly with the light of repentance, thou didst present thy heart to Christ, O glorious one, bringing Him His Holy and all-immaculate Mother as a greatly merciful and most bold intercessor. Hence, thou hast found the pardon of thy sins and with the Angles rejoicest for evermore."