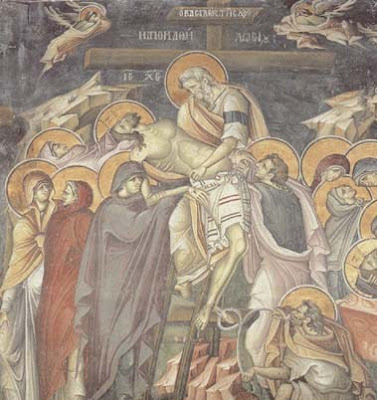 The following story was delivered in a homily by Elder Gabriel, the current Abbot of the Monastery of Venerable David in Evia, on 17 March 2019 during Vespers at the Church of the Transfiguration of the Savior in Kalamaria of Thessaloniki, when talking about the life and conduct of the late Holy Elder Kyrillos, Abbot of the Monastery of Venerable David (+ 2012), his predecessor and the successor of Saint Iakovos Tsalikes.

It was the Sunday of the Myrrhbearers, when Elder Kyrillos, after the Divine Liturgy, went to his cell. As he stood before the Crucified Christ and prayed, he was wondrously transported to Golgotha.

It was the moment of the Descent from the Cross.

Next to him stood the secret disciples of the Lord, Joseph of Arimathea and Nikodemos, and they were preparing for the descent of the Body of the Lord from the Cross.

He turned to Elder Gabriel and told him to spread out his arms. He opened his arms and Saint Joseph placed the white sheet over them.

At that moment Saint Nikodemos, having brought down the Body of Christ from the Cross, placed it in the arms of Elder Kyrillos.

The Elder was moved when he felt the weight of the Body of Christ in is two arms.

These things happened in real life!

After this vision the Elder had the Grace of our God within him and on his entire body and his cell was fragrant together with his body, his cassock and his arms. During this time he would not allow pilgrims to the Monastery to kiss his hand, so the people would not spread around the news that he was fragrant. 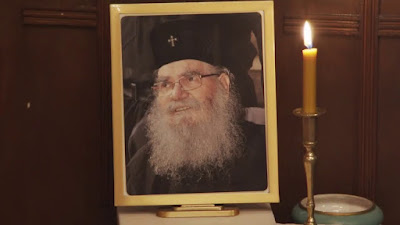