Discourse on the Great Despotic Prayer of Jesus (St. Chrysostomos of Smyrna) 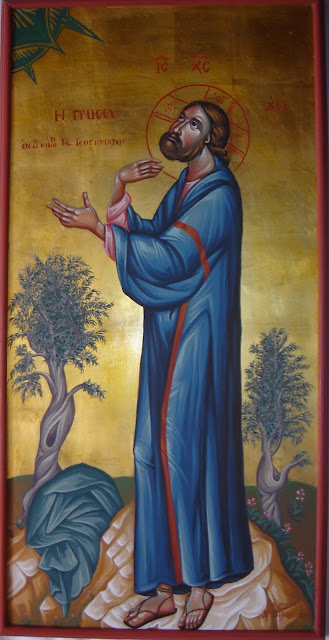 By Holy Hieromartyr Chrysostomos,
Metropolitan of Smyrna (+ 1922)
"Holy Father, keep through Your name those whom You have given Me, that they may be one as We are." (Jn 17:11)
What a great and wondrous and wonderful thing is the prayer which is contained in today's Gospel reading that Jesus prayed to His Father with His eyes lifted up to heaven.

The entire seventeenth chapter of the Gospel according to John contains nothing else but this prayer of Jesus to His Father, which He prays first regarding the glory and triumph of His work, which was for the salvation of the world, the salvation of which He was to accomplish with His blood, and the final hour was approaching; secondly, with regard to His disciples, those who from the beginning and at first consisted of the core, the first small flock that believed in His name, and who, though their good shepherd will be taken away, they were to remain as orphaned and unprotected sheep in the midst of wolves, and having need of this support from above and extraordinary divine protection, not only to bravely endure the coming dangers and persecutions, but also with magnanimity to joyfully receive the exalted and thrice-glorious mission, to spread Christianity to the ends of the earth and preach the gospel to the nations glorifying Jesus; and thirdly, Jesus prays for all those, who through the preaching of the Apostles throughout the centuries will believe in Christ, that they will be arrayed as soldiers of that one army under the one flag of the heavenly King, Christ.

Nowhere else in Holy Scripture do such simple words contain such high and deep meaning and truth.

In this prayer Jesus advocated before His Father on behalf of His glorious work, on behalf of His disciples, and on behalf of all of us as the pre-eminent Comforter, who we have to the Father, for the affection and care and protection of those who believed in Him to which He was always devoted, so that just as He and the Father are one, so also may they be who are sanctified in the truth, for which Jesus sacrificed Himself as a holy and voluntarily victim, and that His disciples will be where Christ is also.

This great Archpriestly prayer, which shows the subtlety and tenderness of feeling of the tender and warm love of Jesus towards His disciples, competes with the immeasurable depth and unseen loftiness of its meaning, which Jesus included in it. This great and moving prayer, considered in its entirety, is none other than an advocacy and entreaty to the heavenly Father for the complete and perfect unity of all the faithful, a unity through the bond of the faith with this one God, unity with this one love, that there may not exist strife and jealousy, schisms and heresies and disagreements among those who believe, unity with this one hope through eternal life, as heirs determined from the foundation of the world those who believe in the Lord Jesus.

The Churches of Christ are, despite the fierce desire of the Lord, torn and divided, and stand as opposing camps against each other.

Imagine all the Churches fulfilling the desire of the Lord and uniting as one force! What could possibly describe such a divine fortress, such a colossal size in the battle line? If it were possible to imagine the colossal size of this unstoppable force, we would imagine that it would have such an organization to include eight hundred million beings.

This spiritual army alone, which would consist of nearly half of the earthly population, would the heavens with the thousand of thousand and myriad or myriad of their angels, who are before the throne of the Heavenly King, would be recognized!

The simpler the words of this prayer are, the deeper they are in meaning.

When this prayer is read and reread it gives light, it gives strength, it gives comfort and sharpens our perseverance, patience and magnanimity, because this prayer includes all of us and it is on behalf of all those who comprise of the little flock of the Orthodox faith, to whom it has pleased God to give the kingdom of truth.