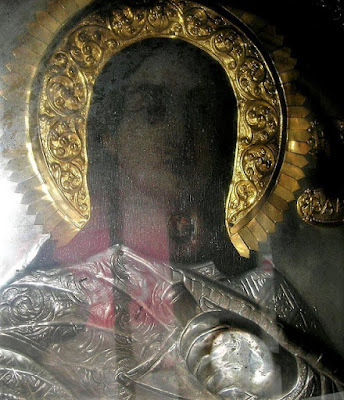 During the German occupation of Greece, in the city of Sparta, there was a German soldier, known in the local community for his awkward and bad character.

One day as he was passing by the Church of Saint Barbara, he repeatedly shot at the icon of the Saint which was on the iconostasis of the crossroads towards Kalogonia, opposite the church. One of the bullets struck the Saint directly on the neck. This naturally made the Spartans react and it made them upset.

A few days later, the same German was getting drunk in an underground tavern in the city, at the junction of Gortsologou and Kleombrotou streets, where the building is still preserved.

At some point, probably after a verbal argument, he started firing inside the tavern. One of the bullets was fired at the stone wall and, returning, hit him in the neck, exactly at the same spot where the ungodly man had struck the icon of Saint Barbara. His death was instantaneous. The Germans never sought responsibility from the Greeks as there were several more Germans who saw exactly what happened. Some even report that in the following days several German soldiers were seen venerating the shot icon.

The news spread quickly in the city and strengthened the faith of the Spartan people, who since then respect and honor the Saint even more.
John at 2:14:00 PM
Share
‹
›
Home
View web version