The Death-Bed Confession of a Persecutor of Christians 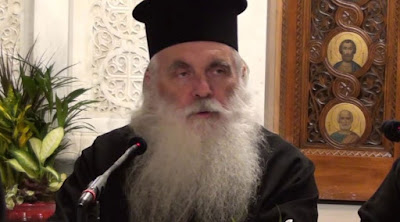 By Metropolitan Nektarios of Argolidos
Let me end with an incident told to me in Odessa a few years ago and published in the book In the Vortex of a Changing World - The New Martyrs of Berdyansk:

"Odessa 2002. The groans of an elderly patient are heard in the ward of a large state hospital in the Ukrainian city. Cancer is widespread. The pains are horrible. Painkillers are not enough. Day and night awake. The patient awaits death as a redemption. Many times he reaches the brink of death, but he seems to be indifferent. For months now he has been fighting between life and death. Ordinary people would say: 'His soul does not come out.'

One day this suffering man seemed to be revived. He desperately asked for a priest. His family ran to a church and asked the pastor to come to the hospital. The priest, without delay, visited the patient. He was shocked by his sad face and condition, but even more by what he heard. The sick old man, without prologues and introductions, as if pressed by something, began to unfold his grievances to the unknown priest.

'Listen my father. I was an atheist from my youth, a militant atheist. I was a member of the party, rose through the ranks, and once became commander of a reform work camp in Siberia. I hated Christians and more the priests. In the camp I had many prisoners, hierarchs, priests, monks and nuns. I did everything I could to make their lives difficult. I sent them to the heaviest jobs, I punished them, I tortured them. I once did this: I ordered the clergy to rape the nuns! They all refused; a hierarch who had caught my eye resisted even more. He influenced others and urged them not to listen to me. I got very angry! At night I took him to an icy room. I undressed him and threw him naked on a table. I tied him up and left him overnight. No, he did not die of the cold. The room was full of rats, which devoured him alive. In the morning we found only his bones in the blood. Yes, I have done such things, and because of this my soul does not come out. I want you to forgive me.'

When the priest went to visit him again the next day, his bed was empty. The patient died that night."
Source: Translated by John Sanidopoulos.
John at 2:29:00 PM
Share
‹
›
Home
View web version