Saint Maksim was the son of the Despot of Serbia, Saint Stephen the Blind (Dec. 10) and of his wife Saint Angelina (July 30). He was born in 1461, while his parents were residing in the region of Skadar, and he was baptized with the name Dorde Bramkovic. The family later moved to northern Italy and acquired castle Belgrado in the region of Friuli. His father, Despot Stephen died in 1476, and young Dorđe became his principal heir. In 1479, Emperor Friedrich III granted them castle Weitensfeld in Carinthia, and Đorđe moved there with the rest of family.

Đorđe′s first cousin Vuk Branković, titular Despot of Serbia, died on April 16, 1485, without direct heirs. His title and wast estates in the Kingdom of Hungary were left vacant, prompting Hungarian king Matthias Corvinus to find a suitable heir. He opted for the only remaining male members of Branković family (Đorđe and his brother Jovan), inviting them to come to Hungary.

In 1486, Đorđe arrived in Hungary and received the title of Despot of Serbia by king Matthias, who granted him cities of Kupinik, Slankamen, and Berkasovo in Syrmia, as well as other towns which fell under these cities.

In 1487, Đorđe was married to Isabella del Balzo (d. 1498), daughter of Angilberto del Balzo, Duke of Nardò in the Kingdom of Naples. She was cousin of queen Beatrice, wife of king Matthias of Hungary.

From 1493 forwards, Đorđe ruled jointly with his brother Jovan, who was also granted the title Despot of Serbia, as it was customary in the Kingdom of Hungary that various senior posts should be held jountlly by two incumbants. In 1494, the two brothers fought against Lawrence of Ilok, who had possessions in Syrmia and Slavonia. In December 1494, the brothers conquered Mitrovica, which they entrusted to their nobles. 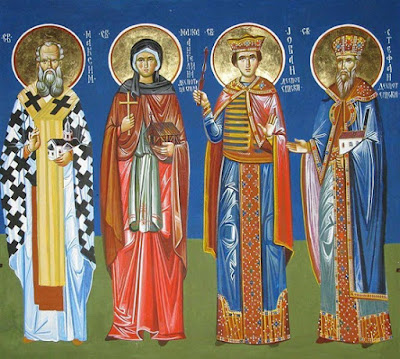 Giving up all his rights as a prince he became a monk at the Monastery of Manasija in central Serbia in 1497 (founded by Despot Stefan Lazaravić between 1406-1418). When the Turks forced him to leave, he took refuge in Romania, where he was welcomed by Prince Radu IV the Great (1495-1508), who entrusted Maksim with important diplomatic missions. In 1507, Maksim successfully mediated peace between Prince Radu of Walachia and Prince Bogdan III (1504-1517) of Moldavia. Eventually he was elected Archbishop of Hungro-Wallachia and governed the Church of Christ with wisdom. In his old age he came back to Serbia, and served as Metropolitan of Belgrade (since 1513). He retired to the Monastery of Krushedol, which he established. After a long illness patiently borne, he found rest there in the peace of Christ on 18 January 1516.

We learn additional information about his life from the hymns of his feast. We know that he was handsome in appearance, that he preserved his chastity from childhood and had purity of life. We learn much about the afflictions and persecutions he endured in the Matins Canon, having to leave his fatherland and flock. In Ode 3 we read that when he “…wast driven from thy fatherland, thou didst find a friendly welcome with Prince Radoul, who rejoiced to have in thee a teacher, a pastor and a spiritual father.” Prince Radoul was a pious man and was joyous to receive the servant of God Maksim. Then in Ode 4: “The enemy of good troubled the people of God and the battle was near to breaking out between the leaders Radoul and Bogdan but thou, O blessed Maksim, as on wings thou didst hasten to the two armies in order to impose peace on them and each one returned to his home, praising God and his servant.”

In the Praises his parents are honored: “Stephen, that jewel of the Church, that crown of goodness, and Angelina, that venerable vine, have produced Maksim as a shoot of the Vine of salvation, the sacred hierarch; they made joy to flow for us in our souls: by their prayers save us, O Lord, in Thy goodness.”

His holy relics are fragrant and numerous healings gush forth from them. 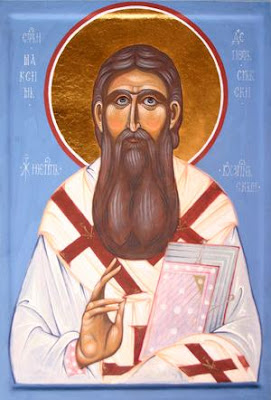 Apolytikion in the Third Tone
Thou wast born and didst grow up abroad, but among thy people thou didst return to live as a leader; desiring the kingdom of the heavens, thou didst abandon earthly power and thou didst find by thy humility, O blessed Maksim, the supreme treasure; for our souls intercede with Christ, we entreat thee.

Kontakion in the Second Tone
O holy hierarch Maksim, having taken up thy cross, thou didst submit to numerous pains and persecutions, deprived of thy fatherland and of the flock which God had given thee, but thou didst suffer all that nobly, so lively was the brightness which thy spirit shone.
John at 10:56:00 AM
Share
‹
›
Home
View web version