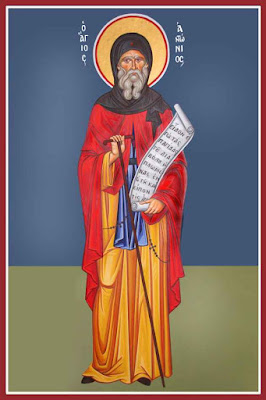 Anthony the monk, whose life Athanasius bishop of Alexandria wrote a long work upon, sent seven letters in Coptic to various monasteries, letters truly apostolic in idea and language, and which have been translated into Greek. The chief of these is To the Arsenoites. He flourished during the reign of Constantine and his sons.

What sort of a man the monk Anthony was, who lived in the same age, in the Egyptian desert, and how he openly contended with devils, clearly detecting their devices and wily modes of warfare, and how he performed many miracles, it would be superfluous for us to say; for Athanasius, bishop of Alexandria, has anticipated us, having devoted an entire book to his biography. Of such good men there was a large number at one time during the years of the Emperor Constantine.

But when, on the death of Alexander, the succession devolved upon h[Athanasius], his reputation was greatly increased, and was sustained by his own private virtues and by the testimony of the monk, Anthony the Great. This monk repaired to him when he requested his presence, visited the cities, accompanied him to the churches, and agreed with him in opinion concerning the Godhead. He evinced unlimited friendship towards him, and avoided the society of his enemies and opponents.

The death of Arius did not terminate the doctrinal dispute which he had originated. Those who adhered to his sentiments did not cease from plotting against those who maintained opposite opinions. The people of Alexandria loudly complained of the exile of Athanasius, and offered up supplications for his return; and Anthony, the celebrated monk, wrote frequently to the emperor to entreat him to attach no credit to the insinuations of the Melitians, but to reject their accusations as calumnies; yet the emperor was not convinced by these arguments, and wrote to the Alexandrians, accusing them of folly and of disorderly conduct. He commanded the clergy and the holy virgins to remain quiet, and declared that he would not change his mind nor recall Athanasius, whom, he said, he regarded as an exciter of sedition, justly condemned by the judgment of the Church. He replied to Anthony, by stating that he ought not to overlook the decree of the Synod; for even if some few of the bishops, he said, were actuated by ill-will or the desire to oblige others, it scarcely seems credible that so many prudent and excellent bishops could have been impelled by such motives; and, he added, that Athanasius was contumelious and arrogant, and the cause of dissension and sedition.

Many others, accounting it absurd to consume their time in altercations about words, quietly adopted the sentiments inculcated by the Synod of Nicaea. Paul, bishop of Constantinople, Athanasius, bishop of Alexandria, the entire multitude of monks, Anthony the Great, who still survived, his disciples, and a great number of Egyptians and of other places in the Roman territory, firmly and openly maintained the doctrines of the Nicaean Synod throughout the other regions of the East.

The same manner of philosophy [monasticism] was about this time cultivated in Palestine, after being learned in Egypt, and Hilarion the divine then acquired great celebrity. He was a native of Thabatha, a village situated near the town of Gaza, towards the south, and hard by a torrent which falls into the sea, and received the same name as the village, from the people of that country. When he was studying grammar at Alexandria, he went out into the desert to see the monk Anthony the Great, and in his company he learned to adopt a like philosophy. After spending a short time there, he returned to his own country, because he was not allowed to be as quiet as he wished, on account of the multitudes who flocked around Anthony.

[Didymus the Blind] was much sought after by the members of the Catholic Church, and was praised by the orders of monks in Egypt, and by Anthony the Great. It is related that when Anthony left the desert and repaired to Alexandria to give his testimony in favor of the doctrines of Athanasius, he said to Didymus, "It is not a severe thing, nor does it deserve to be grieved over, O Didymus, that you are deprived of the organs of sight which are possessed by rats, mice, and the lowest animals; but it is a great blessing to possess eyes like angels, whereby you can contemplate keenly the Divine Being, and see accurately the true knowledge."
John at 12:01:00 PM
Share
‹
›
Home
View web version