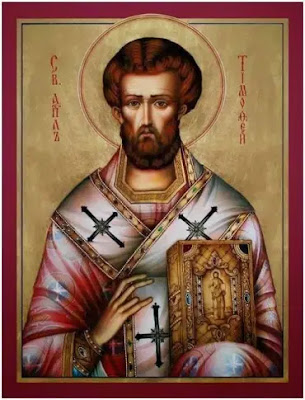 By St. John Chrysostom
1. Timothy too was one of the disciples of the Apostle Paul. To the extraordinary qualities of this youth testimony is borne by Luke, who informs us, that he was "well reported of by the brethren that were at Lystra and Iconium" (Acts 16:2). He became at once a disciple and a teacher, and gave this singular instance of his prudence, that hearing Paul preach without insisting upon circumcision, and understanding that he had formerly withstood Peter upon that point, he chose not only not to preach against it, but to submit to that rite. For Paul, it is said, "took and circumcised him" (Acts 16:3), though he was of adult age, and so trusted him with his whole economy.

The affection of Paul for him is a sufficient evidence of his character. For he elsewhere says of him, "You know the proof of him, that as a son with a father, he has served with me in the Gospel" (Philippians 2:22). And to the Corinthians again he writes: "I have sent unto you Timothy, who is my beloved son, and faithful in the Lord" (1 Corinthians 4:17). And again: "Let no man despise him, for he works the work of the Lord, as I also do" (1 Corinthians 16:10-11). And to the Hebrews he writes, "Know that our brother Timothy is set at liberty" (Hebrews 13:23). Indeed his love for him is everywhere apparent, and the miracles that are now wrought still attest his claims.

2. If it should be asked why he addresses Epistles to Titus and Timothy alone, though Silas was approved, as also was Luke, for he writes, "Only Luke is with me" (2 Timothy 4:11), and Clement was one of his associates, of whom he says, "with Clement and other my fellow-laborers" (Philippians 4:3), for what reason then does he write only to Titus and Timothy? It is because he had already committed the care of Churches to these, and certain marked places had been assigned to them, but the others were in attendance upon him. For so preëminent in virtue was Timothy, that his youth was no impediment to his promotion; therefore he writes, "Let no man despise your youth" (1 Timothy 4:12 and 5:2); and again, "The younger women as sisters." For where there is virtue, all other things are superfluous, and there can be no impediment. Therefore when the Apostle discourses of Bishops, among the many things he requires of them, he makes no particular mention of age. And if he speaks of a Bishop "being the husband of one wife," and "having his children in subjection" (1 Timothy 3:2-4), this is not said, as if it were necessary he should have a wife and children; but that if any should happen from a secular life to be advanced to that office, they might be such as knew how to preside over their household and children, and all others committed to them. For if a man were both secular and deficient in these points, how should he be entrusted with the care of the Church?

3. But why, you will say, does he address an Epistle to a disciple already appointed to the office of a Teacher? Ought he not to have been made perfect for his office, before he was sent? Yes; but the instruction which he needed was not that which was suited to a disciple, but that which was proper for a Teacher. You will perceive him therefore through the whole Epistle adapting his instructions to a Teacher. Thus at the very beginning he does not say, "Do not attend to those who teach otherwise," but, "Charge them that they teach no other doctrine" (1 Timothy 1:3).
John at 11:28:00 AM
Share
‹
›
Home
View web version