Homily on the Synaxis of the Honorable Forerunner (Archim. George Kapsanis) 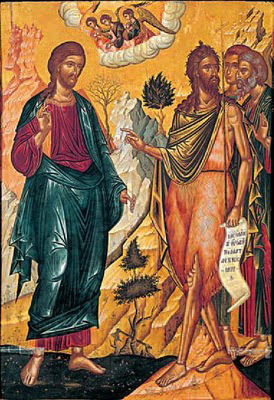 By Archimandrite George Kapsanis
Former Abbot of Gregoriou Monastery on Mount Athos
The Twelve Days [after Christmas] have already come to a close with the Synaxis of the Church in honor of the Honorable Prophet and Forerunner, the leader of the monastic order. All the figures of the Church are beloved by monks, but especially those who practiced the path of the monastic life, and the Honorable Forerunner is the foremost among them. He despised the world, all the good things of the world, and withdrew early on into the wilderness, longing for God. And he was found worthy to become the Forerunner and Baptist of the Savior Christ. Christ was the center of his life.

Monks also go out into the wilderness for Christ, in order to see Christ and repeat the words of the Honorable Forerunner: "Behold the Lamb of God, who takes away the sins of the world" (Jn. 1:29). And not only to see Christ, but also to embrace Christ, and to have Christ dwelling in his heart.

You will have heard that in the years of the Holy Forerunner there were many Jewish ascetics, the so-called "Essenes", who also had communities, and years ago their manuscripts were found in the caves of Qumran. But the Essenes did not receive the grace and glory of the Honorable Forerunner, because they were for the wilderness, they were not for Christ. But the Honorable Forerunner, because he was for Christ, he received this grace and glory.

And so we also with his prayers and his blessing, let us never forget that the wilderness and the monastery and Mount Athos and everything is for Christ, and Christ must be the beginning and the end, the alpha and omega, the center of our lives.

It is to this end, after all, that unceasing prayer helps and directs us. Because, when we cultivate the prayer, the "Lord Jesus Christ", we achieve with the Grace of God that at the center is always the Incarnate and Baptized Christ.

May the blessings we received in this Holy Twelve Days accompany us in our monastic life and be a light and blessing for all our further course, until we end up at the fullness of the court of appeals, in eternal life.
Source: Translated by John Sanidopoulos.
John at 12:30:00 PM
Share
‹
›
Home
View web version