Homily for the Feast of Theophany (Archim. George Kapsanis) 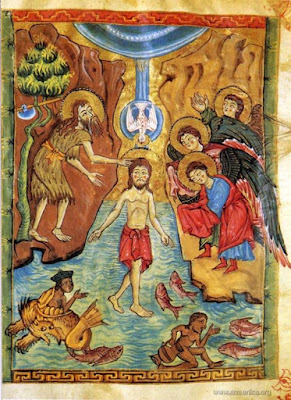 (Delivered in the Refectory of the Monastery in 1989)
Like all Despotic feasts, today's feast has a Trinitarian, Christological, anthropological character and concerns the whole creation.

Trinitarian, because the Holy Trinity appeared very clearly, that is, the three Persons, as clearly as they had never been seen before, and therefore those who were there and those who ministered - mainly the Honorable Forerunner - knew the Trinity of God. And through them all of us. Because they handed this down to us, and we, as if we were eyewitnesses, believe in what was then manifested and revealed. That is why we were chanting yesterday "The Trinity was made manifest at the Jordan", at the Jordan and also to us.

It has a Christological character, because the one who is the main Person in this mystery is the Master Christ, who once again shows His extreme humility and His extreme obedience to God the Father. When He was born in the cave, and now that He is baptized, and on the Cross, and always these were the two virtues of Christ, which became the occasion of our salvation. Just as Adam fell through pride and disobedience, so the new Adam was able to raise the human race only through humility and obedience. And so he left "us an example, that you should follow His footsteps."

But it is a feast that also concerns man, because what is happening with the Trinitarian cooperation in Christ, concerns man. He descends naked into the water, to take the naked man by the Grace of God and to resurrect him and clothe him in the new garment of incorruption. This is for us and for our salvation. As we confess in the Creed, everything that happened under the Lord was done "for us and for our salvation."

And it concerns not only man, but also the whole creation. Because the Lord descended to the Jordan, and entered into the water of the Jordan, He also brought Grace which followed Him and sanctified the waters, the elements of nature, the whole nature. "You liberated the nature of our foreparents" (Saint Sophronios of Jerusalem, Prayer of the Great Sanctification). Thus, in all this creation of God is contained Grace and spiritual blessing, and nature was given the opportunity, when the mystery was repeated, to become a sign of God's presence. Because every time Holy Baptism is performed in our Church and the water is sanctified to baptize a person, a catechumen, this water participates in the blessing of the Jordan. It is the water that the Lord sanctified in the Jordan River. And because it has this Grace of the baptized Lord, that is why it sanctifies the baptized Christian and renews him, so that he may walk in the life of God in a new way.

So we thank the Holy Trinity and the Incarnate and Baptized Lord, who with such supernatural, beyond meaningful, paradoxical mysteries brought about our salvation. And today we in faith also venerate this mystery of His holy Baptism and the Theophany of the Trinity, and we ask Him to help us to always live in humility and obedience to His holy Church, so that we too can feel these mysteries, to live these mysteries, to see them with spiritual eyes, but also to be sanctified, not forgetting what I emphasized a moment ago, that all these things were done for us and for our salvation.

And woe to us if God did such miraculous things for our salvation and we are left out of salvation. That is why every feast, as I once emphasized to your love, must be for us a moving experience and at the same time a step and an elevation towards God, so that the purpose of the feast is fulfilled and we be perfected in Christ and to grow old, according to Saint Maximus the Confessor.

May the Grace of the Baptized Lord be with us all the days of our lives.