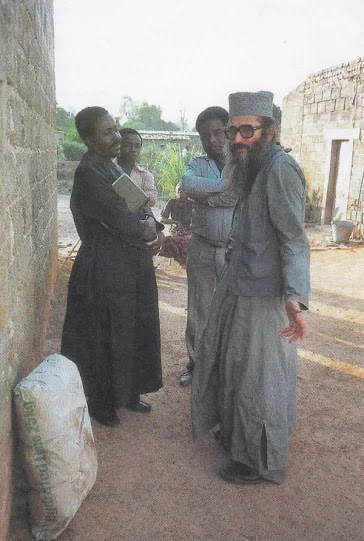 By Monk Moses the Athonite
He was born in the village of Theodosia in Kilkis in 1942. At a young age he went with his parents to Thessaloniki, where they lived very poor. His second home was the church and his second father was the pastor of his parish. He enjoyed studying Holy Scripture and going to catechism. From a young age he entered the daily struggle while studying. He became spiritually connected with the late Augoustinos Kantiotis (+ 2010) and began correspondence with Fr. Chrysostomos Papasarantopoulos (+ 1972), who was in Africa. The desire for missionary work was constantly burning inside him. He also had contacts with Elder Philotheos Zervakos (+ 1980) of the Longovarda Monastery of Paros. He knew technical, mechanical, electrical, electronic, nursing, lifeguard and construction things. He attended the Frontistirion for Catechists and took foreign mission courses at Apostoliki Diakonia, as well as nursing at Red Cross. He even got a degree for swimming. Later he would rescue a child from drowning in a lake in Kolwezi. He also wanted to study medicine, but he did not succeed. However, he went to the Higher Frontistirion of Rizareio School.

In 1975 he went on the African mission near Fr. Amphilochios Tsoukos in Kolwezi, Zaire (Congo). There he started building churches with enthusiasm, knowledge, diligence and boldness, without knowing the local language, Swahili. He would sleep with his shoes on, as he did not have time to take them off. This was leading him to being overworked. He once suffered from sunstroke and for years suffered from headaches. In fifteen months he built nine churches.

In 1977 with Fr. Nikodemos Bilalis he built the Church of Saint Nikodemos the Hagiorite in Karyes of the Holy Mountain. Then he met Elder Paisios, who told him to become a monk at Gregoriou Monastery, to be ordained there and then to go on a mission. The following year he became a monk by the abbot George and was ordained by Bishop Chrysostomos of Rodostolou. With the blessings of the fathers and with sacred enthusiasm, he set off to begin his great missionary work in Africa.

At first he went to Kananga to Fr. Charitonas Pneumatikakis and Sister Olga. With the blessings of the Metropolitan of Central Africa Timothy, he then went to Kolwezi. He said to his father: "God has sent me as a missionary to this region. Wherever I go, I will help anyone I meet who needs me." With many temptations, difficulties and great problems, his superhuman, great and important missionary work began. His selflessness and industriousness inspired many to support him in various ways. Apart from being a liturgist, spiritual father and catechist, Fr. Kosmas became the father and brother of many of our unfortunate black brethren. He became a loving pastor, a philanthropic father, a just judge, a helpful physician, a good builder, a perfect engineer, an evangelical missionary. He lived to love and pray, to offer and to sacrifice.

It was as if he had a premonition his last days were approaching. He had an extraordinary enthusiasm, he worked, he preached repentance, he said goodbye. On the night of January 27, 1989, a car fell on his own and he was left dead. Three months earlier he said to his Elder Fr. George: "Missionary work is not for a few months. Whoever wants to be a missionary must leave his bones in the soil of Africa." So it happened. His tomb became a popular place of pilgrimage. The natives leave flowers of gratitude and thanksgiving. In one decade he baptized 15,000 Africans.

The late missionary, whom I knew a little and was very jealous of, said: "Our African brethren are people of inwardness; the Europeans usually underestimate them, but they are very wrong. The soul of Africans leans towards mysticism and that is why Orthodoxy has something to say and suggest to them, but only authentic Orthodoxy, the one that is monastic and of the Holy Mountain. Because magic has great power among our African brethren, it is a true demonocracy. Their magicians are very powerful and influential, but in the end Satan exterminates them as well. That is why they often turn to Christ, the victor over all magical and demonic bonds and evil eyes. In Africa I saw how true the Gospel of Christ is."