Foolishness for the Sake of Christ 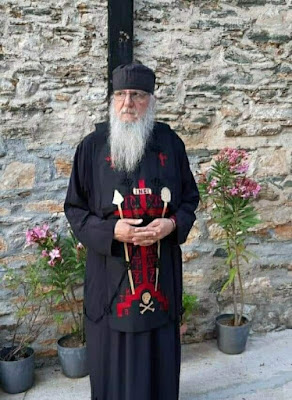 By Father Chrysostomos,
Monastery of the Panagia Lampidonos
Once, on Mount Athos, I went to the Skete of the Monastery of Xenophontos, in a Cell, where Saint Athanasios the Athonite was being celebrated on his feast. Many pilgrims had come to the festival of the Cell. I was impressed by someone, whose clothing was poor, trying to make himself look like a servant of the belly, and he would go out every now and then to smoke. I asked about him and most of the comments were that he was crazy or something. I got up at some point and I approached him and told him, "Let's go outside for a while." I asked him how he found himself to be on Mount Athos and where he lived. And I said to him, "Have you been on Mount Athos for so many years and you smoke?" In fact, as he smoked, he just took the smoke in and then he released it out. We moved away from the others and I gained his trust and I said, "You will tell me the truth," and he explained to me how he came to be on Mount Athos. He lived in a cell on a hill, which had no windows, just a sleeping mattress, a candle and some books. His survival was made by serving the fathers of the Skete, shopping for them in Karyes and generally doing their chores. He never told anyone, "I'm tired and can't go." Karyes was about forty-five minutes on foot. And he told his story and I realized that I did not have a common man next to me. In the end I asked him, "Have they not proposed to make you a monk who has lived in the Skete for so many years?" And he said, "Of course, and the Abbot said it, but I believe if I was going to become a monk I could not do it." This was an excuse I did not believe. He struggles, he struggled and I am sure that at that time when his soul will rise, those who made fun of him will understand. Many years have passed since then and I do not know if he is alive.

Another case, when we were in Kapsala, in Evangelismos, we had not yet officially taken over the Monastery of Esphigmenou, at New Year's and Saint Basil's with the old calendar, the Elder, the current Abbot and I had gone down to Karyes to go to the Monastery of Iveron to greet the Abbot, who was celebrating (Father Vasilios Gontikakis). While we were waiting I was with a group of monks and we were talking. And at that moment someone whom I did not know was passing by and he came out and came to me and made a prostration, kissing my hand, "Your blessing, my father, happy new year." Everyone was surprised because they thought he was wrong or I don't know what else. This fact, however, puts things in their place - because indeed only I had the Priesthood and the others were mere monks, and as you understand on Mount Athos, everyone, Monks, Abbots, Hieromonks, all of us wear the same clothes, which means that you do not know who is a Priest, Monk or Abbot.