St. Gregory of Nyssa on the Massacre of the Innocents 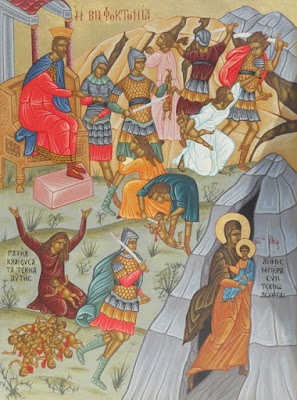 By St. Gregory of Nyssa

(Excerpt from his Homily on the Nativity of Christ)
But let us now gaze upon the celestial wonders. For behold, not only do Prophets and Angels announce the glad tidings of this joy to us; the heavens, too, proclaim the glory of the gospel through their own marvels. Christ “sprang out of Judah” for us, as the Apostle says, but the Jews are not illumined by Him Who thus sprang forth.

The Magi were strangers to the promise of the Covenants and without a share in the blessing of the Fathers; yet they surpass the people of Israel in knowledge, for they recognized the heavenly luminary and were not ignorant of the King in the cave. The Magi bring Him gifts, but the Jews plot against Him. The former worship Him, but the latter persecute Him. The former rejoice at finding Him Whom they were seeking. The latter are perturbed at the birth of Him Who was announced. For, when the Magi “saw the star” over the place where the Child was,” “they rejoiced with exceeding great joy.” “When Herod...had heard” the report, “he was troubled, and all Jerusalem with him.”

The Magi offer frankincense to Him as God, honor His regal dignity with gold, and through myrrh, by prophetic Grace, allude to the economy of His suffering. The Jews [Herod and his soldiers], however, condemn the entire infant population to slaughter, which, it seems to me, convicts them not only of cruelty, but also of the utmost folly. For what did they intend by this act of infanticide? And to what end did the murderers dare to perpetrate such a heinous crime? A certain new and marvellous celestial sign, it says, indicated to the Magi the appearance of the King. 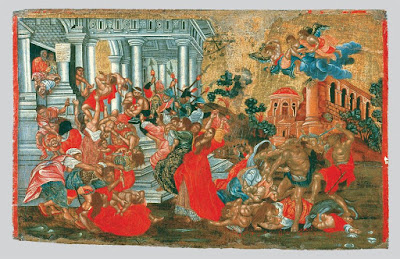 What, then? Do you believe in the truth of the sign that announces Him, or do you suspect that what is rumored about Him is groundless? For if He is such a nature as to have the heavens under His control, is He not obviously above your control? But if He makes His living or dying dependent on you, in vain do you fear such a one. For what purpose do you plot against one who acts in such a way as to be under your control? Why do you issue that dire mandate, your wicked decree against the infants, that hapless babes be slaughtered? What wrong did they do? What cause of punishment and death did they bring upon themselves? Their sole crime is that they were born and saw the light of day.

Because of this it was necessary that the city be filled with executioners and that a throng of mothers and infants be assembled, with people accompanying them and parents and all their kinsfolk gathering together, as one might expect, to witness their plight. Who could describe this calamity in words? Who could bring before our eyes through narratives their torments? their mingled lamentation? the mournful dirge of children, mothers, relatives, and fathers crying out piteously at the threats of the executioners? How could one portray the executioner standing beside the infant with bared sword, with a grim and murderous look on his face, uttering words to match his expression, dragging the infant towards him with one hand, and stretching out his sword with the other, and the mother on the other side pulling the child towards herself and holding out her own neck under the edge of the sword, so as not to see with her own eyes the hapless child being destroyed by the hands of the executioner? How could one recount the reactions of the fathers? their exclamations, their lamentations, their final embraces of their sons, and many other such things that occurred at the same time as these? Who could set forth the various kinds of torment, the twofold pangs of the mothers who have recently given birth? The bitter searing of their feminine nature? how the hapless babe clave to its mother’s breast and at the same time received the mortal blow through its vitals? how the unfortunate mother held out her breast to the mouth of the infant and received the blood of her child on her bosom? At times, with the swing of his hand, by a single stroke of his sword, the executioner would thrust through both mother and child, and a single stream of blood would flow, mingled together from the wound of the mother and the mortal blow dealt to the child.

And since, by Herod’s abominable decree, not only was the death sentence to be meted out to newborn infants, but also any child who had reached his second year was to be carried off and slain (as Scripture says, “from two years old and under”), the account quite naturally foresees yet another predicament: that the intervening time had made the same woman mother of two children. What a spectacle it was in such situations, with two executioners busying themselves with one mother! The one would be dragging towards him the child that was running back to his mother, while the other would be tearing the suckling away from his mother’s bosom. What suffering the poor mother must have undergone in these cases! Her instincts are split between two children, each of whom kindles the flames of maternal affection in equal measure, for she does not know which of the wicked executioners to follow: the one dragging her infant off to slaughter from one side, or the other doing the same thing from the other side. Is she to run to her newborn, who is emitting what are as yet indistinct and inarticulate laments? But she hears the other, who is already able to speak, tearfully calling out to his mother in a faltering voice. What is she to do? Who is it to be? To whose cry will she respond? In response to whose lamentation will she lament in turn? Which death will she mourn, being stung by the goads of her maternal nature equally for each?
John at 2:18:00 PM
Share
‹
›
Home
View web version