Venerable Nektarios was born in the small town of Bitel (or Butili) in Bulgaria around the year 1430. In the world he was named Nicholas. Before the Turkish invasion his mother had a vision: the Most Holy Virgin herself appeared and told her to flee and go into hiding with her husband and children. They immediately got people together from Bitel – children, women and weak old people left the city, while the men remained to defend the city from the Turkish invader with weapons. The Turks conquered the city and spread devastation, slaughter and atrocities. When the Turks passed and the situation was calmed down, many of the residents returned, but Nicholas’s father, who was now old and after making an agreement with his wife, withdrew to a monastery dedicated to the Holy Unmercenaries Saints Kosmas and Damian, not far from Bitel, where he became a monk with the name Pachomios. Young Nicholas often visited his father there, and received an education.

One year, when that feast day of the monastery was celebrated, the villagers brought, among other things, a barrel of wine. But because there were so many guests for lunch, the wine was quickly drunk and diminished. The monk Pachomios together with his son Nicholas went to the basement to wash the barrel of wine. But instead, a miracle happened, and the barrel was refilled with wine and everyone drank this wine together, which had a strangely pleasant aroma and good taste.

Nicholas, having reached adolescence, went on to Mount Athos to become a monk. There he met the Elder Dionysios and the clairvoyant Elder Philotheos, who upon meeting him displayed for him his clairvoyant gift:

"You are the child Nicholas, son of the monk Pachomios. You want to stay here and live with us."

This surprised Nicholas, who replied:

"From where, honorable Father, do you know me and everything about me?"

Elder Philotheos said to him:

"From God the Father, my child, Who sent you to us. He revealed everything to me about you."

Delighted by this, Nicholas remained with these noble elders with great love and affection for God and his teachers, the ascetics Dionysios and Philotheos.

Asceticizing with them, he was soon tonsured a monk by them and was given the name Nektarios and completely submitted to the elder Philotheos, as a spiritual father and guide.

After becoming a monk, the Venerable Nektarios devoted himself to greater feats of asceticism and began to progress very quickly in the God-pleasing virtues. But the cunning and envious devil could not bear the spiritual advancement and approach of God's graces to the Venerable Nektarios and began to attack him in various ways, instilling in his soul hatred and aversion to the elders Philotheos and Dionysios, to leave behind everything the experienced elders taught him and from whom he drew spiritual strength and power in his asceticism and godliness.

But the devil did not succeed in this, for the blessed Nektarios remained steadfast and unwavering in his spiritual leaders, the elders Philotheos and Dionysios. After the devil failed to confuse the soul of the Venerable Nektarios, he decided to pour out his malice in another way, introducing envy into the soul of another ascetic, in order to harm the blessed Nektarios. The envy of that ascetic was so strong that he asked the elders to expel the Venerable Nektarios or else he would kill him.

"I do not want to see that brother Nektarios, he does not love anyone, but only loves himself, and he does not love you, although you help him in everything," said the young ascetic to the old men.

"Dear son, do not insult your spiritual brother Nektarios, he is not bad, he loves everyone, and he loves you too, and most of all our God, the Lord Jesus Christ. Day and night he stands before the icon of our God and the Holy Fathers, prays for the salvation of all and very quickly overcomes the mysteries of God. And you yourself know very well that in the Holy Gospel it is written to love one's neighbor," the elders told him, presenting various examples from the Holy Gospel.

"He is not as good as you think. He constantly thinks badly of all of you, even when he prays before God, and he does not pray for our salvation, as you say, but for our misfortune and restlessness."

"Do not sin against your soul, son. Nektarios is our spiritual and pure child. He does not think badly of anyone, he only strives to get closer to God's purity and perfection," the old men said calmly to the young ascetic in whose soul entered the spirit of evil.

"He is not pure, he is a scourge of God, he should be expelled from here immediately, because he spreads schism and stench in our cell. Either drive that debauchery out of here, or I tell you that I will kill him. I can no longer see him here," the young ascetic, into whom the devil had entered, threatened.

The elders saw that the spirit of wickedness and malice had entered the soul of that unfortunate man, and that their advice did not help, and they advised the Venerable Nektarios to separate from them for a time, until the envious brother came to his senses, full of anger and malice. Nektarios said:

"My fathers, teachers in the work of God, I fully understand your concern for me. With great pain in my heart and soul I will separate from you, but such is the will of God, and we obey it and must walk the most thorny paths to reach the perfection of God. I will stay away from you, but only physically, and spiritually we will be together again."

With great difficulty in his soul, the Venerable Nektarios separated himself from his spiritual leaders Philotheos and Dionysios and went to live in Karyes with Elder Daniel. 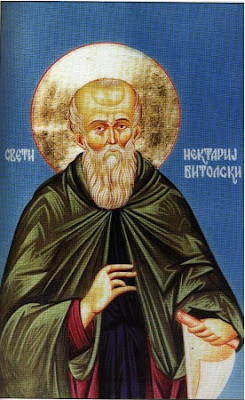 After some time, the elder Philotheos died in old age, and Dionysios was left alone. Unable to bear the unfortunate envy for which the Venerable Nektarios had left, Dionysios himself turned away from the accuser monk and went to look for the blessed Nektarios. After finding Daniel in Karyes, he begged him to give them a place where he and Nektarios would asceticize.

Daniel, at the request of the elder Dionysios, gave them the small Hermitage of the Archangels, called Kofa, and they settled there and lived together a life of asceticism in prayer and fasting. In their hermitage they spent their time in peace and silence, and with their labor, making various handicrafts, they secured their modest existence, and even helped the other monks around them in providing the basic means of subsistence. And the envious unfortunate monk, into whom the devil - the spirit of evil - had entered, wandered here and there on Mount Athos, until at last he left that holy place and went to the world, where he perished and lost his soul, like any other who will follow the path of the devil - the eternal enemy of the good and beautiful.

Some time later, the blessed elder Dionysios also died. Nektarios honorably and with dignity buried his teacher and companion in the hermitage. After Dionysios died, Nektarios was left alone, with deep sorrow for his beloved teacher. He doubled his efforts in prayer, fasting and labor. Seeing such effort, and wanting to enlarge the crown of his reward, God allowed the Venerable Nektarios to fall into very serious bodily ailments. Suffering from severe bodily ailments and misfortunes, the Saint endured all the pains with great patience and gratitude to God, thus gaining another crown of dignity with God.

Finally, overcoming human envy, demonic attacks and bodily pains, cleansed through his deeds and diseases, the Venerable Nektarios quietly and with dignity moved to the eternal kingdom of Christ on December 5, 1500.

Five years after his death, his disciples and followers opened his tomb and noticed that his relic had not decomposed and that it had a pleasant fragrance. The relic was placed in a coffin, on which a relief of his face was made. The coffin with his relic is still kept on Mount Athos, in the cell where he lived a life of asceticism.

The faithful pray to him for strengthening of their marriage relations, especially if the marriage breaks down, to return peace, harmony, purity and love and to return the heart of the husband or wife from the way of impurity in order to be one body, and also for other troubles – infertility, happiness and success.
John at 3:42:00 PM
Share
‹
›
Home
View web version