Saint John the Hesychast as a Model for our Lives 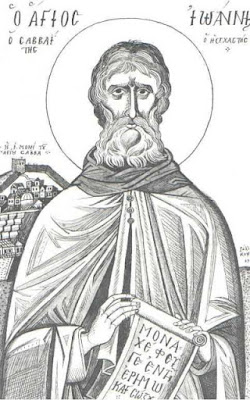 By Protopresbyter George Papavarnavas
Venerable John the Hesychast was from Nicopolis in Armenia and lived in the fifth century, during the reign of the most-pious emperor Maurice. There he learned sacred letters, and when his parents left this vain world, he distributed his inheritance among the poor, but he built a Sacred Temple dedicated to the Most Holy Theotokos, where he lived in silence and prayer and asceticism with ten other monks. Later he was ordained Bishop of Koloneia, located at the Hellespont, namely the Sea of Marmora. Having exercised his episcopal duties with zeal and dedication for nine years, then, because he loved the hesychastic life, he went to Jerusalem and settled in the Sacred Monastery of Saint Savvas the Sanctified. Saint Savvas did not know who he was, because God had not revealed it to him, so he tried him in various acts of service. Because he was pleased with his behavior and his God-pleasing conduct, he entreated the Patriarch of Jerusalem to ordain him a Presbyter. Saint John revealed to the Patriarch that he was a Bishop, and begged him not to reveal this to anyone. Then the Patriarch said to Venerable Savvas that it was not possible for John to be a Presbyter, and to not bother him about it.

Two young men visited Venerable John and asked him to give them his blessing. The Saint blessed the one who was an Orthodox Christian, but the one who was not a Christian but a Monophysite he told that he must first renounce his heresy and then he could receive a blessing. And he stressed that he must do this publicly, in front of all those who were present. Because this man obeyed, the Saint blessed him, and the young man left rejoicing and at peace, casting off the inner turmoil he struggled with earlier.

Once the Persians went to the Monastery and demolished the cells of the monks. As they approached the cell of Venerable John, a lion suddenly appeared, which drove them away, and guarded the Saint, as well as his cell.

Before the repose of the Saint he took a dry fig, put it on a dry stone, and said to the brothers who were with him: "If this dry fig sprouts, know brothers, that God will give me a place of rest in the future age." Then the miracle took place and the dry fig sprouted and became three figs, which the Saint, having thanked God, ate together with the brothers.

His life and conduct give us the opportunity to highlight the following:

First, a hesychastic life means an evangelical life. It is the effort of the believer for the application of all the commandments of Christ. It is the struggle for the purification of the heart from passions, so that man can see God, according to the word of Christ Himself: "Blessed are the pure in heart, for they shall see God." It is the attempt to purify the nous from sinful thoughts, the imagination, the enslavement to created things and from the fumes of the passions and of sin. And when this is done, then the nous will be illumined by the Grace of God, it will be concentrated in its natural space, where the heart is, and from there it will ascend to God and see His Light and be immersed in His glory. The heart of the fallen man who is not reborn by the Grace of God is full of the "debris" of the passions, his nous is captivated by passionate thoughts and the imagination, he cannot easily concentrate himself, but wanders about as a delinquent, is a servant to the passions and is enslaved to the devil. Saint Gregory Palamas characteristically emphasizes that "when the human nous distances itself from God, what is beastly becomes demonic." On the contrary, when one strives to live in asceticism, prayer and the sacramental life, then one's nous concentrates on oneself and through memory ascends to God and is illuminated by the uncreated Light, as Basil the Great characteristically says, that "When the nous is not dissipated upon extraneous things, nor diffused over the world about us through the senses, it withdraws within itself, and of its own accord ascends to the contemplation of God." He also emphasizes that nothing darkens the nous as much as cunning and nothing illuminates it as much as the reading of the divine Scriptures and silence. And Saint Gregory the Theologian, that lover of silence, proclaims: "More than anything I accepted and loved silence, because I consider it a co-worker in the ascent to God and as the most important thing in life, because it helps man become a god by Grace."

Secondly, the Holy Fathers of the Church fought against heresies as if they were infectious diseases, but loved the heretics and wished for their correction and return to the Church. They tried with arguments, but also with miracles - depending on the gifts of each one - to persuade them to return to the path of salvation with true repentance, that is, by renouncing the heresy and accepting the Orthodox faith. That is, true spiritual physicians did what physicians do to the body, who out of love for the patient fight his illness and strive to cure him. Sometimes, of course, the treatment is done with a lot of pain, but that does not mean that they have something against the patient. And when they remove a rotten part of his body, they do it not out of hatred, but to save him from certain death. Thus, the Church, through her spiritual physicians, heals people from heresy, which poisons their psychosomatic organism and leads them to eternal death, and in turn gives them spiritual health and life.

With the application of all the commandments of Christ, the sacramental life, prayer and study of the divinely-inspired Scriptures, the heart is purified and the nous is illumined, which is the eye of the soul, through which "God can be seen and His Light understood," according to the words of Anthony the Great, the professor of the hesychastic life.