John and Sophia, the Parents of Saint Savvas the Sanctified 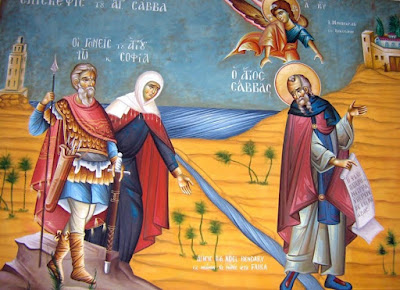 Savvas, who has become a citizen of the heavenly mother-city, had as his fatherland the country of Cappadocia and the village of Mutalasca, subject to the metropolis of Caesarea. This village was formerly unheard of because of its small size and lowly rank but has become well-known to everyone because of this godly youth who stemmed from it; likewise Ramathaim was formerly insignificant and contemptible but became famous throughout creation from the time it gave birth to Samuel, dedicated to God from infancy. Savvas had well-born Christian parents called John and Sophia, of whom he was born, as we know plainly from an accurate chronology of his life, in the seventeenth counsulship of Theodosius. Not long afterwards, when his father was sent to serve in Alexandria in the regiment called the Isaurians and emigrated from Cappadocia with his wife, this holy child, being about five years old, was by divine providence left behind with his parents' property in the village of Mutalasca just mentioned to live with his maternal uncle called Hermias, who had a wife of evil character. In consequence the boy became unhappy and fled to one Gregory, his uncle on his father's side, who lived about three miles away in a village called Scandus.

2. ENTRY INTO THE MONASTERY OF FLAVIANAE

Soon afterwards, with his uncles Hermias and Gregory quarreling with each other over both him and his parent's property, Savvas, being predestined by God from the womb and foreknown before his creation like the great prophet Jeremiah, despising all the things of this life without exception, offered himself to the monastery of Flavianae, twenty stades distant from the village Mutalasca. On being admitted by the archimandrite and enrolled in the community there, he received a strict education in the monastic life and had in a short time learnt both the Psalter and the rest of the observance of the cenobitic rule. His uncles just mentioned, who had come to an agreement, tried repeatedly to make him leave the monastery in order, they said, to take charge of his parents' estates, and urged him to enter into marriage; but, guarded by God, he chose rather to be an outcast in the house of God than to give himself to the turbulence of the world. Consequently, he utterly refused to leave this holy way of life. He thought of the Gospel saying of the Lord that runs, "No one who puts his hand to the plough and turns back is fit for the kingdom of heaven." And he pondered in himself such thoughts as the following: "I must flee from those who advise me to leave the way of the Lord as from snakes, for 'bad company corrupts good morals.' And I am afraid of being weakened by persistent entreaty and of earning the curse of the prophet that runs, 'Cursed ae they who turn away from Your commandments.'" Such was Savvas from childhood in his love of piety.

[After going to Jerusalem and submitting himself to Saint Euthymios in the Palestinian desert, then to Saint Theoktistos in his cenobium, the account proceeds as follows:]

There was in the cenobium a brother of Alexandrian birth called John, who for a long time pressed the holy Theoktistos to give him leave to go to Alexandria to make a proper disposition of his family property, since he had learnt that his parents had died. On being given leave he asked to be accompanied by Abba Savvas, as a trustworthy friend able to endure hardship; the blessed Theoktistos, yielding to John's request, sent Abba Savvas with him to Alexandria. When they arrived in Alexandria and were pondering how to investigate John's family affairs, the blessed Savvas was recognized by his mother Sophia and his father John, who had changed his name to Conon and was in command of the Isaurian regiment. They urged him to stay there, enlist in the army and become senator of the regiment, but he repulsed them with the words, "Having once enlisted in the service of God the King of all, I cannot cancel this service, and those who try to draw me from it I cannot bear to call my parents. For I shall abide by my commitment to God till my last breath, hoping to die in the holy life of asceticism." Since their many machinations were not able to weaken his resolve and kee him with them, they wanted to give him twenty solidi for his expenses; he, however, did not accept this gift, but seeing them very upset he took just three solidi in order to oblige them. He then left Alexandria immediately with his companion John and on returning to the cenobium placed the three solidi in the hands of the great Theoktistos.
John at 1:00:00 PM
Share
‹
›
Home
View web version