Homily on the Sunday of the Holy Forefathers (Archimandrite George Kapsanis) 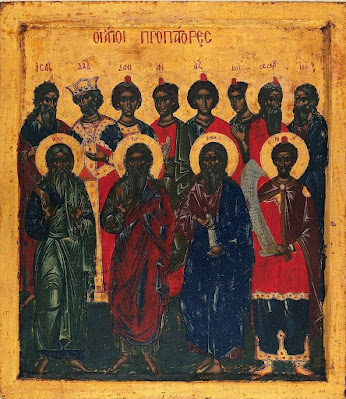 (1988)
Today, the Sunday of the Holy Fathers, conveys to us the nostalgia of the people of God who were before Christ for the coming of the Messiah. We cannot understand this today, because Christ is in our midst. But when in those years before Christ people longed for God, as Emmanuel, that is, as God in our midst, and could not rejoice in Him like this, the nostalgia for this blessed hour was deep within them.

For if they had not been the sacred branches of the tree of the Forefathers, the last branch and the most beautiful of this tree would not have been the Lady Theotokos, from whom our Savior Jesus Christ sprouted as a fruit.

And the holy Forefathers prepared themselves and the coming of Christ with their struggle but also with the acceptance of the Cross. Because, as the great luminary of our Church, Saint Gregory Palamas, theologizes, the mystery of the Cross pre-operated in the Old Testament. Otherwise the Righteous could not have been Righteous. Through the pre-operating mystery of the Cross of Christ they prepared to see Jesus Christ coming, emptied and crucified on behalf of the life and salvation of the world.

A great proof, that through the Cross of Christ the Forefathers were perfected, is the holy and righteous Abraham, of whom we heard about in the beautiful reading.

By the Cross, then, Abraham was perfected. And it seems that he so faithfully lifted up and lived the Cross of Christ in his life, that he became the father of believers. Father not only of the Old Testament people, a people who after the Old Testament abandoned the faithful Abraham and walked according to the will of their hearts, but also became the father of the new people of Grace, the Christian people, because by faith he was justified, as the great Paul says. And by faith we Christians, as imitators and descendants of Abraham, namely spiritual descendants of Abraham, are justified as a gift.

All this, therefore, we, contemplating today and commemorating in faith the Holy Forefathers and their desire for Christ, and their cross for Christ, and their nostalgia for Christ, bless them today and ask for their powerful intercessions to God, so that we, the new people of Grace, no longer the faithful before Christ but after Christ, honoring the Lord, may be much more willing in our unification with Christ and in our struggle for Christ.

May the Lord strengthen all of us, so that all that we live, read, hear daily, the sacred hymns, the holy Gospel, the apostolic readings, the books of the Old Testament, the hymnology of our Church, we will live as moving experiences, as successive amazements before the greatness of God and before the love of God and before the struggles of the people of God, which they did out faithfulness and out of love for the Lord.

We are already approaching - the great feast of the Lord's Epiphany is also approaching - that which according to the sacred Chrysostom is the Metropolis of feasts, and we are all called to work more intensively spiritually, to be found worthy to celebrate this holy feast of our faith with reverence.