Encomium to the Most Holy Theotokos (for December 25th) 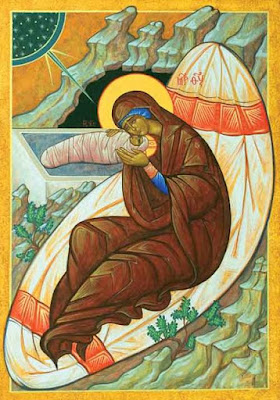 Encomium to the Most Holy Theotokos
For the 25th of December
(Edited by Fr. George A. Bouteris in 1902
based on Proclus of Constantinople and the
hymnography of the Church.)
God is brought forth by the Virgin Mother
Today, the gate of the King of glory is opened,
which the Highest alone traveled through.

Today the Beginningless begins
and the Word is noted down.

Today heaven and earth have united,
speaking of Christ.

Today God on earth has arrived,
and man to heaven has been raised.

Today fire has been made visible,
the nature of which is invisible to man.

Today the Virgin brings forth the Fashioner of all things;
the earth offers a cave, and the heavens a star.

The star declares Christ, the Sun of those who sit in darkness;
the magi the gifts, the shepherds the miracle, the Angels the hymn.

Today the ancient bond has been broken,
of the condemnation of Adam.

Our paradise has been opened, the serpent destroyed.
For he had before walked, now he sees, the Creator born of a mother.

Today the all-pure Theotokos Mary calls us to church,
as did the star the Magi to the cave.

Today the undefiled vessel of virginity sanctifies us
the paradise of the second Adam;
the workshop of the union of two natures;
the festival of the eternal covenant;
the God-encompassing container,
in which the Word was instilled with flesh;
the living bush of nature,
which was not consumed by the divine rays of fire;
He who on a truly swift cloud is among the Cherubim,
you physically hold.
The most-clean dew from heaven on a fleece,
in which the first shepherds were garbed.

Mary the servant and mother;
the Virgin and rational Heaven,
the only bridge of God to man;
the fearsome yarn of the economy,
who inexpressibly wove the tunic of unity;
the weaver who with the Holy Spirit,
wove Him whose power from on high overshadowed her;
ancient wool of Adam's fleece;
thread that passed through the Virgin's undefiled flesh;
immeasurable measuring rod that was dressed in grace;
technician who by hearing conceived the Word.

The Lover of Mankind did not disdain to be born of woman,
since this bestowed His life.
If perchance this Mother did not remain a Virgin,
then that born of her might be a mere man,
and the birth would be no wise strange;
but since she after birth remained a Virgin,
then how is He who is born indeed not God?
It is an inexplicable mystery,
since in an inexplicable manner was born He
who without hindrance went through doors when they were locked.
When confessing in Him the co-uniting of two natures,
Thomas cried out: “My Lord, and my God!”

Let us first learn the economy and cause of the present
and then we will glorify the power of the One who became flesh,
because by the sins of human nature,
we were brought into debt.
Through Adam we all signed the bond to sin,
and the devil held us all in slavery.
He kept producing our bills,
using our much-suffering body as his paper.
There he stood, the wicked forger,
threatening us with our debts and demanding satisfaction.
One of the two things had to happen:
either the penalty of death had to be imposed on all,
because "all had sinned",
or else a substitute had to be provided
who was fully entitled to plead on our behalf.
No man could save us;
the debt would have been his liability too.
No angel could buy us out,
for such a ransom was beyond his powers.
One who was sinless had to die for those who had sinned;
that was the only way left
by which to break the bonds of evil.
THE END AND TO GOD BE THE GLORY
Source: Translated by John Sanidopoulos.
John at 2:10:00 PM
Share
‹
›
Home
View web version