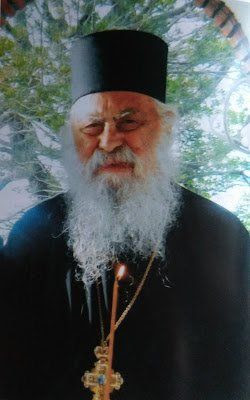 ...continued from part one.
The Elder Flew Like a Helicopter
On the eve of the sad event with the two sister nuns of the Hermitage of Saint Basil, which was granted to Elder Gabriel by Metropolitan Nikephoros of Kykkos, in order to house his female sisterhood, and which cost the life of the late sister Vasileia, a spiritual daughter of the Elder saw the following vision:

She saw the Elder flying, as if he was on a helicopter, and awestruck she said to him:

"Elder, come and get me, so we can fly together."

However, he replied to her:

"I can't right now. I have to go to my two daughters that need me and, in fact, one of them I will take permanently with me."

The next day the accident took place, when the vehicle of the monastery fell into an inaccessible cliff and a helicopter was notified, to help recover the victims, whose condition was unknown to everyone.

The rescuers managed with ropes to rescue one injured nun. The other one was not able to be pulled out alive.

The Elder took her with him, as he told his spiritual daughter in a vision.

Tightly United
Fr. Eustathios, much beloved by the Elder, used to go the Monastery of the Apostle Barnabas, to collect snails.

One day he brought to the Elder a sprig full of snails, a sight for the eyes, which reminded him of an art work.

All were tightly attached to it, and feared their removal.

The Elder admired it and placed it in his office. He showed it to us by teaching us:

"Just as the snails are stuck in this branch, so you must always be attached to our Christ. Your removal from Him also leads to troubles, which can lead even to death. If the snails are removed from the branch, they can be stepped on by people. We must also be united among ourselves. Christ's agony in Gethsemane for His disciples was for them not to disperse, but 'to be one' (John 11). So I always want you to be united among yourselves and united in the branch of faith, in the branch of life."

How Will We Communicate in Paradise?
The late Elder Gabriel used to in the mornings walk in the beautiful garden of the Metochion of Kykkos, Saint Prokopios, together with all his spiritual children who were there.

In 2010, one of his spiritual children was tormented the night before with a thought: where will we end up when we gain the Kingdom of God and how will we communicate.

So he asked the Elder, who immediately answered to "be patient and the problem will be solved when we reach the birds."
We finished the walk and ended up at a huge round cage, which was home to dozens of small, beautiful birds.

The Elder approached and - O the miracle! - dozens of small birds gathered on the wire mesh with their feet holding the grid close to the Elder.

The atmosphere immediately filled with happy tweets. The Elder came back and smiled at us, humbly making his Cross. We were speechless.

He bowed his head and said to us:

"Like the birds, so we will be united, beloved, glorifying God with our spiritual fathers, if He will allow it!"

The Envelope With the Medical Expenses
One of the great gifts that the Elder had was his great compassion and his great mercy.

He stayed up all night painting iconography, while he was seriously ill, with heart failure, so that he could help those who were in need.

He told us of a nun, who once, being very distressed and in need of a doctor, the Elder without knowing her or knowing her problem, when she went to receive his blessing, he put in her hand an envelope with money.

His compassion and love for his neighbor was also the reason why he founded the "Philanthropic and Missionary Group of the Apostle Barnabas", which, with the help of God and the Elder, continues to help so many poor families that need medical tests and therapies.

In Need of a Doctor
The chanter of the Monastery of Saint Panteleimon in Acheras recounted wonderful events from the life of the Elder, that made a mark in his life:

"When I was sick with cancer in 1994, my condition was difficult, and my family, although I had been in a hospital in Nicosia, they also called a doctor from Israel, so that he could have a look, to see if he needed to operate on me.

The Elder, who I knew from the Monastery of Saint Panteleimon in Acheras, visited me and told me that during my operation he would be present, and that he prayed the Lord would help me for the operation to be successful.

During the ten-hour operation that the Israeli surgeon did, he had two assistants in the operating room, who he did not know, but it seemed that they were aware of the medical procedure and even the surgical science.

Thus, after my sickness, he announced this fact to me, thinking that, like him, they too had been called by my family.

Then, after I found that no one from my family had called a doctor, it brought to my mind the words of the Elder before the surgery, so I asked him:

And he was reserved, so that his spiritual power and cooperation with the Apostle Barnabas would not be manifest, and he replied.

'I had supplicated the Apostle Barnabas to come and help. And it looks like he was there.'"