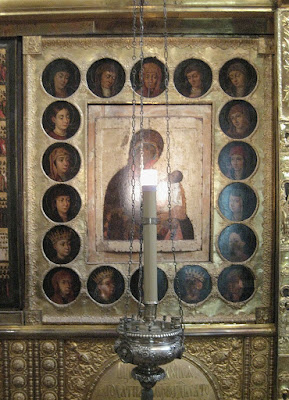 The Shuiskaya-Smolensk Icon of the Mother of God in a frame with images of foremothers and prophetesses can be seen on the iconostasis of the Kremlin's Annunciation Cathedral.

The image of the Mother of God itself dates back to the 15th century, and it is quite standard. But its frame is unique, although it was created later, in the late 16th - early 17th centuries.

It is unique, firstly, in that it depicts women of the Old Testament, who were usually never depicted in icons. And also the fact that one of these women is possibly a hidden portrait of Princess Sophia.

The righteous women are depicted in round medallions, each contains an inscription, a name and a phrase, as if coming from the mouth, but some of the inscriptions (on the right side of the frame) are made in such a way that they can only be read with the help of a mirror. An order for such an unusual work probably came from Tsarina Natalya Alexeevna (sister of Tsar Peter I) in 1698. This year Tsar Peter urgently returned from a trip abroad to Moscow to suppress the Streltsy revolt. The instigator of the riot, Princess Sophia, was tonsured a nun and imprisoned in the Novodevichy Convent.

There is a version that the icon painter in the guise of the Righteous Susanna (her portrait is in the center of the lower edge of the frame) conveyed the features of the disgraced Princess Sophia, who took the name of Susanna at tonsure (although Sophia's features are guessed in all portraits).

The images of the righteous women form symmetrical pairs according to the meaning of their life, the inscriptions (with the help of a mirror) are combined into a symbolic text, and thus the frame with the stamps becomes a symbolic mirror reflecting the purity of the Virgin Mary. And since the Mother of God herself in spiritual literature is likened to a "clear mirror without a spot", the entire work acquires a hidden meaning due to the spatial metaphor of "mirror in mirror".
For a more detailed study, see here . 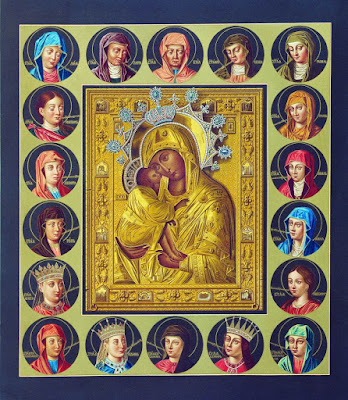 The border depicts eighteen righteous women of the Old Testament (with the depicted Russian text in parenthesis):
Top row, left to right:

Bottom row, from left to right: