Synaxis of the Panagia Kyparissiotissa in Megara

By Spyro Symeon
In every monastery when it is built it is customary in the inner courtyard of the monastery near the katholikon to place the so-called founding cypress symbol of eternity and longevity, but also a memorial of the founder of the monastery.

There, in the 15th century, the then twenty inhabitant monks approached with an icon of the Panagia with the last hope of being saved when pirates had surrounded the monastery and began to climb its walls.

Indeed, as a miracle that they later attributed it to the Panagia, whom they had by their side and they entreated fervently from within the branches of the cypress, the barbarians did not find them but they were rescued as the pirates passed by, running here and there throughout the monastery to plunder but also to slaughter so that nothing was left as evidence of their vandalism, but while they searched to acquire every bit of the monastery that was useful and while they had heard the voices of the monks before they invaded the monastery, they could not find them since the prayers of the monks to the Most Holy Theotokos were hearkened and with her veil she covered the whole cypress tree under her protection. 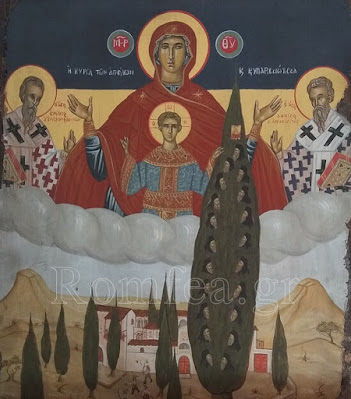 At this point, after this miracle, the monks built a small shrine where on its dome they painted the Panagia who they named Kyparissiotissa in memory of her miracle, while next to her were painted the patron saint of the monastery, Saint Hierotheos and his disciple Saint Dionysius the Areopagite in a prayer posture.

This shrine reminded the monks of the miraculous event that they lived, standing as a reminder of this event but also to remind every person who passes in front of it that our hope should always be is our Panagia our Mother, the Mother of the Savior and Redeemer of the human race, Christ, while this miracle is especially honored in the Monastery on October 27 where worship and all kinds of religious honors are given to the Panagia Kyparissiotissa.

In recent years the monastery has been transformed into a convent and today has a very hospitable sisterhood with the first abbess Isidora Agierotheitissa, who is known for the rare gift given by the Panagia to be a hymnographer.
Source: Translated by John Sanidopoulos.
John at 11:53:00 AM
Share
‹
›
Home
View web version