Synaxis of the Icon of the Mother of God of Kasperov

This holy icon had been brought to Kherson from Transylvania by a Serb at the end of the sixteenth century. Passing down from parent and child, the icon had come to a certain landowner Mrs. Juliana Ionovna Kasperova of Kherson in 1809.By the time it came into her hands, the icon had decayed significantly.
One night in February of 1840 she was praying with tears, seeking consolation in her many sorrows. Looking at the icon of the Virgin, she noticed that the features of the icon, darkened by age, had suddenly become bright and was renewed. Soon the icon was glorified by many miracles, and people regarded it as wonderworking.
The noblewoman Vera Burleeva, who lived in a neighboring village at the same time, could not heal the paralysis of her left hand. In the spring of 1840, in a dream, she heard the voice of the Mother of God, sending her to the village of Kasperova to pray to the icon. Burleeva was brought to the Kasperovs' house, where after prayer she recovered.
In the summer of 1843, there were three more outstanding healings. After prayers in front of the icon of the Mother of God, Ivan Shumyakov, a 13-year-old peasant boy from the city of Kherson, who suffered from epileptic fits, recovered. Maria Smeshnaya, who was brought to Kasperova's house with a paralysis, recovered. Before healing, Smeshnaya was unable to move on her own. After praying in front of the icon of the Theotokos and being anointed with oil from the lamp, the mind of the peasant Paraskovya Semipudova, who had been possessed for a long time, returned to her senses. 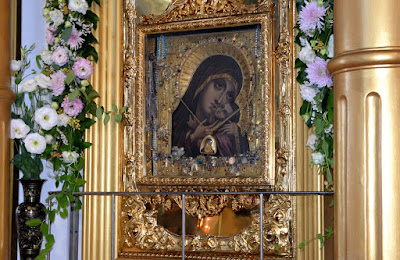 Six months later, in the last days of January 1844, the icon was transferred to a village church.

Since 1852, at the request of the inhabitants of Kherson, every year on the feast of the Ascension of the Lord, the Kasperov icon of the Mother of God began to be brought to the city cathedral.
During the Crimean War (1853-1856), the icon was carried in procession through the city of Odessa, which was besieged by enemy forces. On Great and Holy Friday, the city was spared. Since that time, an Akathist has been served before the icon in the Dormition Cathedral of Odessa every Friday. Archbishop Innocent (Borisov) directed “that this event should not be forgotten in the teaching of posterity,” and should be commemorated on October 1.
The Kasperov Icon is commemorated on October 1, June 29, and Bright Wednesday. 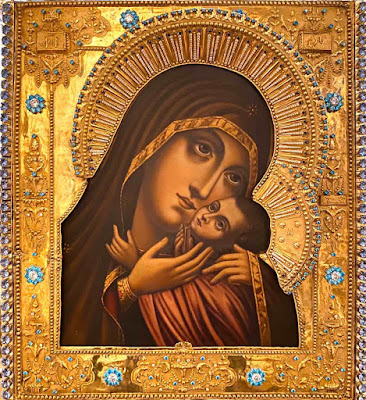 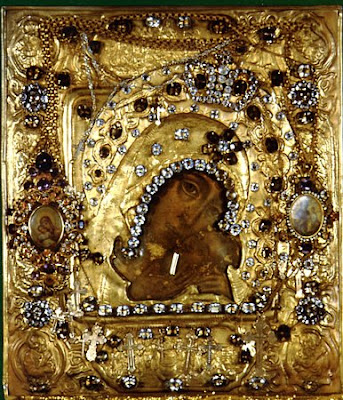