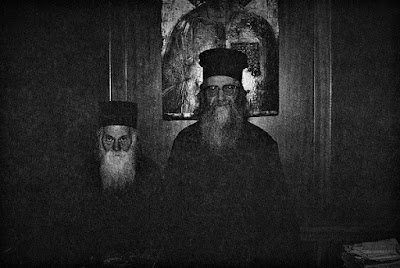 By Haralambos Boussias
In the days of the birthday of our Church, that is, of holy Pentecost, in 1990, the Elder decided to make a pilgrimage to the Great Church of Christ and the Ecumenical Patriarchate.

He had been invited at that time by the director of the private office of the Patriarch, Metropolitan Bartholomew of Philadelphia, the current Ecumenical Patriarch, and the Dean of the Theological School of Halki, Metropolitan Maximos (Repanellis) of Stavroupolis.

Patriarch Demetrios received him at the Phanar with a lot of love after suggestions and being informed that he was the eminently charismatic Elder of Mount Athos, and he considered the Elder's visit there a special blessing for the Ecumenical Throne.

The Patriarch and the Elder met for the first time at the request of the former in the sacred sanctuary of the Patriarchal Church of Saint George, next to the Holy Altar at the conclusion of the Divine Liturgy.

Later when he received him in his office the following strange occurrence happened to the Patriarch:

The meeting of the two men lasted about half an hour, without, however, either of them speaking - neither the Patriarch nor the Elder.

The Elder who had been emptied of passions, desires and was of the same will had been filled by the grace of the Holy Spirit, the source of all truth.

The invocation of the name of Jesus Christ, which is above all names, lowered his nous to the hidden space of his heart, to speak through his infinite silence with God, the Good Shepherd, who leads everyone to pastures of salvation.

The silence was broken by the submissive of the Elder, Hieromonk Cherubim, who, annoyed by the prolonged silence, addressed the Patriarch, saying:

"Your All-Holiness, our presence has made you tired!"

And he received an answer immediately:

"No, on the contrary, the presence of the Elder relaxes me!"

The communication, you see, of the two men was purely spiritual.

Words were superfluous, since their souls had a common point of contact.

They spoke through our Lord himself.

Later, during the Elder's visit to Halki, the Dean, Metropolitan Maximos, "as a sign of reverence" ordered the Metropolitan of Seleucia, Kyrillos, to feed the Elder on his knees with a fork, who flooded with holiness the closed holy school of the Queen City.