Saint Nicholas Sviatosha, Prince of Chernigov, and Wonderworker of the Kiev Caves (+ 1143)

Saint Nicholas Sviatosha was a great-grandson of Great Prince Yaroslav the Wise and son of Prince David Svyatoslavich of Chernigov (+ 1123). Nicholas was the Prince of Lutsk, and he had a wife and children (his daughter was later married to the Novgorod prince Saint Vsevolod-Gabriel).

On February 17, 1106 the holy prince left his family and was tonsured at the Kiev Caves Lavra, in the Near Caves. Nicholas Sviatosha carried out his obediences with great humility. For three years he worked in the kitchen, for which he chopped wood and carried water. For the next three years, he was gatekeeper at the monastery. The Saint had a garden around his cell. Out of his own means he built at the monastery the Temple of the Holy Trinity and the infirmary church in the name of Saint Nicholas, his patron saint.

Saint Nicholas was the first of the Russian princes to accept monasticism, patiently enduring the reproaches of his brothers for his decision to lead a life of humble obedience.

After he had progressed through various obediences, Saint Nicholas took upon himself the vow of silence. When the Saint received money, he used it to beautify the church and to procure books (because he loved reading), or he distributed it to the poor.

Saint Nicholas was a zealous peacemaker; in 1142 he reconciled the Prince of Chernigov with the Great Prince Vsevolod. 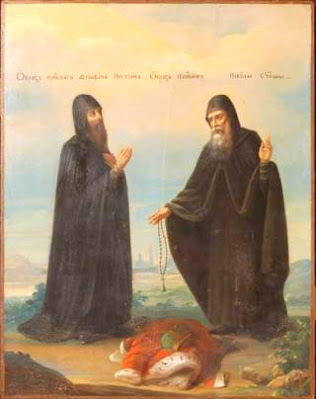 It often happened that when this blessed prince fell ill, working in obedience, then a doctor named Peter, having learned about it, prepared medicine for him in order to cure some of his ailments. With God's help, the prince recovered and never allowed himself to be healed. Once it happened that the doctor himself fell ill, and the blessed one said to him: "If you do not take medicine, you will soon recover; if you do not obey me, you will suffer a lot." Considering himself an experienced doctor, he did not obey, but drank the prepared medicine and, wanting to get rid of the disease, almost lost his life. Then he was healed by the prayer of the Saint. 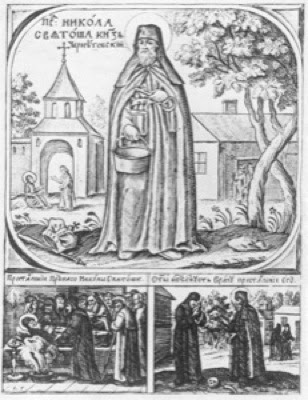 The blessed one called the one who had been healed and said to him: "Peter, you should get tonsured in the angelic schema and work for the Lord and His Most Pure Mother in this monastery for me, because in three months I will leave this world." Hearing this, the doctor Peter fell at his feet and cried out with tears to allow him to help and heal him. The blessed prince, raising the weeping doctor, said to him: “Do not grieve, Peter. The Lord knows how to preserve all creation that He Himself created; He will take care to feed the hungry, to intercede for the poor, and to save those in trouble. He will be a refuge for you too. And let my brothers in the flesh not cry for me, but for themselves and for their deeds, in the deplorable vale of this world, in order to be comforted in future bliss. I do not need treatment for temporary life, for I died long ago to all that is temporary, the dead will not come to life, and doctors will not resurrect, as Isaiah exclaims" (Is. 26:14).

Having said this, the blessed one went with the doctor to the cave and prepared a place for his burial. The doctor spoke as he wept: “I know that if you want, you will pray to the Lord so that you can live longer. Put me here!" The blessed one said to him: “May it be as you wish, if there is God's will for that. Let us serve Him in one monastic image!" Then the doctor, on the advice of the blessed one, took monastic vows and spent three months, incessantly day and night shedding tears during prayer. The blessed one, comforting him, said: "Brother Peter, would you like me to take you with me?" Peter replied: "I want you to let me die on your behalf, but you stay here and pray for me." The blessed one said to him: “Dare, brother, and be ready; in three days, at your request, you will leave this life."

So, Peter, having partaken of the Divine and Life-giving Mysteries of Christ, when the foretold time came, lay down on his bed and gave his spirit into the hands of the Lord.

On the day of the repose of this holy prince, almost the entire city of Kiev gathered, giving him the last kiss and with many tears asking for his prayers. He reposed in the year 1143 on October 14th. Especially the brothers of the blessed one, Izyaslav and Vladimir, having learned about his death, wept for him with inexpressible tears. 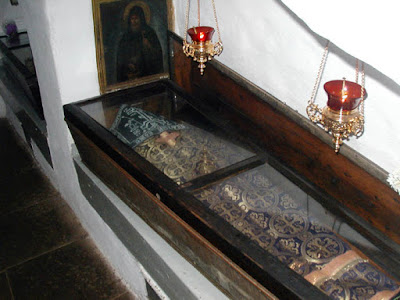 Soon after the death of the Saint, his brother Prince Izyaslav fell grievously ill and was near death. He desired to drink water from the well of Kiev Caves Lavra, and having said this, he became numb and was no longer able to speak. Arriving at the Kiev Caves Lavra, he drank from the well of the monastery, and the abbot of the monastery had him wear the Saint’s hairshirt. Izyaslav put it on and was healed.

Since then, Izyaslav always took and put on this hair shirt when he fell ill - and immediately recovered. And in every battle he had this hair shirt with him, and remained unharmed. Once, after a sin, he did not dare to put it on himself and was then killed in battle, but first commanded to put himself in it, hoping that he would be healed at least from eternal diseases and ulcers.

The relics of the Venerable Nicholas rest in the Near Caves, where maps indicate them from 1638. 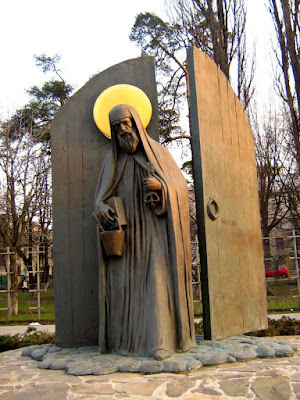