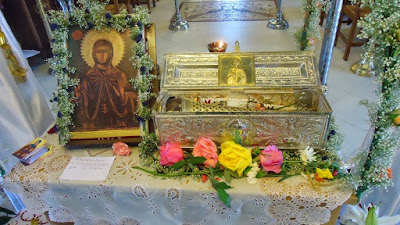 In 1890 a fire broke out in the forest of our Holy Monastery between the areas of Alonaki and Agios Theologos. The fathers, when they saw the fire, took pickaxes, saws, axes and other related items for extinguishing. They took with them also a mule, on which they hung a sack with the relics of Saint Anastasia the Roman, and hurried quickly to the burning forest.

When they got close enough to the fire, an opposite wind blew the flames in the opposite direction to the side where the fathers were. The brothers are scared lest they be surrounded by flames, so they began to move away, leaving the mule alone. The mule had already been besieged by the flames, while the fathers mourned the loss of the relics.

In a few minutes they found that the mule paradoxically crossed about three hundred meters of inflamed area, without suffering anything, carrying the sacred relics intact. As soon as the animal came out of the flames, the fire went out on its own.

In 1912 very dense locust clouds spread over the peninsula of Sithonia. There were many dependencies of the Holy Monasteries of Mount Athos, including ours, in the area of Neos Marmaras, near the village of Parthenon. The locusts fell on the hundred olive trees of the dependency, causing them to completely dry up.

In view of the complete destruction of the vegetation of the dependency, its treasurer Elder Andreas Grigoriatis asked to be sent immediately a priest from our Monastery with holy relics. The Monastery then sent the then Hieromonk Papa-Athanasios with a case containing the left foot and the blood of Saint Anastasia the Roman.

Arriving at the dependency, Papa-Athanasios chanted, did a Sanctification of the Waters, as well as a Supplicatory Canon.

Immediately after the sanctification the locusts did the following work. They began to eat all the useless grasses and weeds, and thus let the useful fruits and vegetables grow freely. This relieved the dependency from additional gardening work.

Then thousands of seagulls appeared, which fell on the locusts and devoured them.

An eyewitness of the miracle was the Metropolitan Eirenaios of Kassandreia.

The late Father Gelasios, former brother of our Holy Monastery and then a Simonopetritis, told us the following:

"When I was a novice at the Monastery of Saint Gregory, one night, during the Service of Matins, I was sitting in a stall of the Liti. At the moment when the deacon exclaimed, "The Theotokos and Mother of the Light, with hymns let us honor and magnify," and the 9th Ode began, I saw two very modest and majestic women coming out of the Beautiful Gate. The first looked about 60 years old, the second very young. Then they began to roam all the stalls, and the young woman handed out coins only to those suggested by the older woman.

The the distribution began with the late abbot Papa-Athanasios. To the other fathers, to some they gave, to others they did not. When they approached me, they also gave me a coin. Later, when I told my holy Elder Papa-Athanasios these terrible things, he answered me that the first woman was our Lady the Theotokos and the second was Saint Anastasia the Roman."

The late Elder Ephraim Grigoriatis (+ 1991), a brother of our Holy Monastery, narrated the following:

"During the abbacy of His Holiness the Abbot Papa-Athanasios, I saw in my dream that I was in the courtyard of our Holy Monastery and I was approached by two women who were discussing intensely with each other about an issue. One of them grabbed me by the shoulders, shook me hard and said to me: 'What do you think, do you run the Monastery or do we? Some time ago you received two essays that are vicious in character. You know this and you hide it. Go quickly and tell the abbot, and expel them immediately.'

I woke up and I was still in pain from the jolt. I then went and narrated in detail what I saw to our Elder, Papa-Athanasios. He told me that one of them was our patron Saint Anastasia and the other was Saint Julitta, of whom we have a relic. The next day, the Elder expelled the suspects from the Monastery, who ended up in prison and had a bad end.

5. A Companion in the Departure of the Soul

It is said by the older Gregoriou fathers that Saint Anastasia appeared to fathers shortly before their death and warned them of their impending end. It should also be noted that when a brother reposes, before the funeral service which takes place in the Katholikon of the Holy Monastery, he is first transferred to the Chapel of Saint Anastasia, and there he stays overnight with the living doing a Trisagion and the reading of Psalms.
John at 1:36:00 PM
Share
‹
›
Home
View web version