Synaxarion of the Holy Great Martyr Niketas the Goth

Verses
To Niketas.
Niketas is enflamed and becomes a victory-bearer,
Or we should rather say a fire-bearing victory-bearer.
On the fifteenth, Niketas was cast into the furnace.
To the Holy Martyrs who contested with St. Niketas.
A pious multitude contested in Gothia,
Casting the barbarians out of their minds.
He was an offshoot of the illustrious race of the Goths, who were located beyond the Istros River [modern day Danube], during the reign of Constantine the Great [306-337]. He was taught the pious faith as a child from the Bishop of that place named Makarios. Having been raised piously and nobly, he taught those of his own race to also believe, and to conduct themselves pious and virtuously. He also piously believed and lived virtuously, and became a preacher and teacher of the truth to all. Because the impious Athenarichos, the ruler and head of one section of the Gothic race (they were divided into two sections), was defeated with much shame by Phrikigerni, the ruler of the other section of the Goths, with the help and alliance of the divine Cross and the Roman army, as time passed he revived and strengthened once more, and with great madness the defiled one went against the pious Christians. He punished them with barbaric and unbearable punishments. The villain did not do this alone, but he ordered also those under him to imitate his own madness and savageness against the Christians.
Because the Martyr of Christ Niketas was increasing his preaching of the gospel, and proclaiming the faith of Christ illustriously, for this reason he was suddenly and forcefully captured by those Goths while he was teaching. Then he was urged to deny Christ, but because he was not persuaded, they crushed all the members of his body. Though he was being muzzled by this punishment, he proclaimed Christ all the more. For this he was cast into a fire. In this way the true victory-bearer of Christ Niketas received the unfading crown of martyrdom, along with many others of his fellow Goths. His holy relic was indicated by a star to a friend and acquaintance of his named Marianus. He brought it to the land known as Mopsuestia, where Niketas was honored with a magnificent temple, and with other honorable testimonies through the working of various miracles. 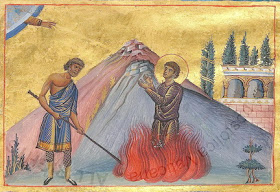 Apolytikion in the Third Tone
Thou didst defeat error and triumph in martyrdom, Niketas namesake of victory: for thou didst conquer the ranks of the enemy and end thy contest by fire. Pray to Christ our God to grant us His great mercy.
Kontakion in the Second Tone
Thou didst stand firm and defeat delusion and hast received thy Martyr's crown, O Niketas, namesake of victory; thou art rejoicing with the Angels. Together with them pray unceasingly to Christ our God to save our souls.