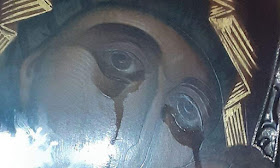 On September 11, 2020 the Metropolis of Kaisariani, Vyronas, and Hymettus issued an official statement on its website about a "weeping" icon of the Most Holy Theotokos which is in the Church of Saint Demetrios in Nea Elvetia of Vyronas, a suburb of Athens:


Announcement
"With respect towards the actions of our Philanthropic God and Father and the obligation to support our brethren in times when the love for God has grown cold, we inform the pious about the event of the weeping icon of the Theotokos the Parigoritria ('Consolation') kept in the Parish of Saint Demetrios in Nea Elvetia, Vyronas.
During the Divine Liturgy on the feast of the Nativity of the Theotokos (9/8), while the Gospel reading of the feast was being read by the officiating Priest, the praying parishioners found that the icon of the Theotokos the Parigoritria had begun to weep. During the incense before the Great Entrance, the censing Priest descended from the main staircase of the Beautiful Gate and headed to the shrine where the icon is placed to incense. The parishioners, of course, commented on the incident and wondered why it was happening.
The tearing continued to occur gradually over the following days.
News of the event was spread by the faithful who began to come to venerate the weeping icon of the Theotokos.
The tradition of our Church on these issues teaches that:
'Signs' according to the word of our Lord are addressed to believers and not to the unbelievers. Believers need to be affirmed and supported in the faith of their spiritual struggles. It is a 'sign from God' for the faithful (Mark 16:16).
It is also noted that:
The event took place during the celebration of the Divine Liturgy where the Holy Spirit encompasses the space and with His presence blesses the gathering of the faithful.
Furthermore, the New Testament mentions the actions of God that manifested themselves in a time of prayer (Transfiguration of our Lord, prison release of the apostle Peter, the vision of the Apocalypse, etc.).
The day that the event occurred during the celebration of the Nativity of the Theotokos is also noted. The Mother of God comforts and supports the faithful so that they remain steadfast in their faith.
That the 'sign' manifested itself in this particular icon of the Theotokos who is called 'Comforter' is interpreted as saying that the Theotokos supports and comforts the faithful, as she comforted and supported the Apostles and other faithful of the first Christian community, when persecuted and endangered they shut themselves in and guarded themselves 'for fear of the Jews' (John 20:19).
'These [that is, the holy Apostles] all continued with one accord in prayer and supplication, with the women and Mary the mother of Jesus, and with His brothers' (Acts 1:14).
The first Christian community, the Disciples of the Lord Jesus Christ, gathered around the Mother of our Lord Jesus Christ, so let us pray and beseech that our Lord Jesus Christ will protect us from the present need."


The Metropolis
It should further be noted that the sexton of the church was the first to notice the "tears" streaming from the eyes of the icon as she was cleaning it, as she says in her testimony:
"I went to clean her, because people came in, for the sake of cleanliness, due to the coronavirus, and at the time of the Gospel, I saw her left eye blurring and a tear falling. I wiped it, and I wiped it again. I thought it was external. I left it for a while. The Gospel was said, I went again. I saw the right one also with a tear that started running down... I shivered all over and began to weep."
When she went to inform the priest of the incident, he told her not to say anything until the icon is examined after the Divine Liturgy.

For many days crowds gathered at the church to venerate the "weeping" icon of the Theotokos Parigoritria, which continued to "weep". 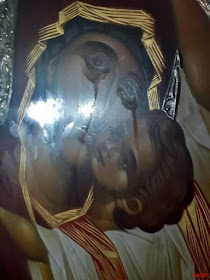 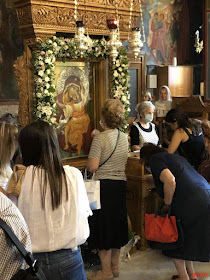 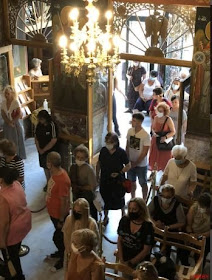 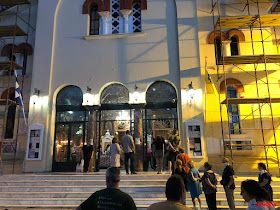 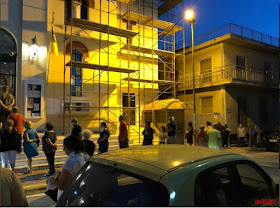