The Diseases of Blissful Happiness 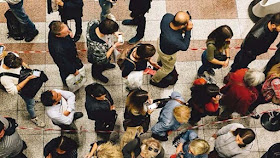 By George N. Papathanasopoulos
It is not only Greece that is showing symptoms of social disintegration, as we live in our daily lives and as projected by the Mass Media and Social Media. It is the so-called civilized West. Its countries and only these, for the most part, have democratic regimes, but in reality it is a luxurious and valuable building with treasures inside, which is collapsing. The sad thing is that none of the current leaders of the Western countries are sounding the alarm. They are all managers of decline… And if anyone dares to tell the truth about the moral nature of the modern West and reacts, he receives the fire of its followers. In March 2020, the French publisher Presses universitaires de France published the work of Hugues Lagrange, Deputy Director of Research at the National French Research Center, titled Les maladies du Bonheur. In it, the author describes the state of modern reality in the West. Its main finding is that social life is extinct in its countries as a "disease" that belongs to the past like the once deadly diseases (tuberculosis, malaria, etc.).
In the luxurious cage where modern man lives, he sees only the diseases he has faced, he is proud to see that the average life expectancy has increased and he ignores the diseases that torment him, such as cancer, cardiovascular problems, obesity, and whatever else ails him. This includes mental illness - stress, depression, panic, boredom, loneliness - and drug addiction. It is noted that when Lagrange wrote the book, the coronavirus pandemic did not appear.
As a cause of mental illness in modern man, the French scientist locates the pain - he studied the change in the lifestyle of modern man. Specifically, he states that bourgeois anonymity, social indifference, alienation, the loosening of family ties, divorce, the dissolution of the religious horizon, are symptoms particularly harmful to the soul of modern Western man. In the past, he lived in the safe environment of a large and united family, a society in solidarity with its members, an ecclesiastical community with love and interest in each other. A lack in these is occurring for the first time in human history and the effects are already visible. Now the system restricts man's freedoms, isolates him, removes him from the security of the social environment, codifies his life, and makes him autonomous from God. Alienation from fellow human beings, degradation of life, and autonomy from God are leading the West to collapse. China and Islam are waiting.
It is noted that Lagrange has a leftist ideological background and his book was widely presented and critiqued in France by reputable publications (Le Monde, Le Monde Diplomatique, L’Observateur).
Source: Translated by John Sanidopoulos